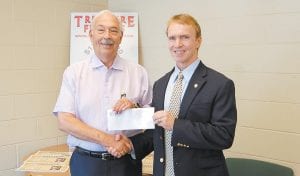 On behalf of the City of Whitesburg, Whitesburg Mayor James W. Craft claimed $6,335.69 from Kentucky State Treasurer Todd Hollenbach Tuesday morning at the Letcher County Courthouse. The money was from four unclaimed insurance settlements dating back to 2004.

Hollenbach spent Tuesday leading volunteers in search of the owners of more than $700,000 in unclaimed property. Claimants meet with Treasury staff to begin the claims process.

Each year, the Kentucky Treasury takes custody of millions of dollars in property that is presumed lost or abandoned. Treasure Finders is a statewide proactive outreach developed by Hollenbach to notify potential claimants of cash or tangible property being held by the Kentucky State Treasury.

For Letcher County, the State Treasury is currently holding approximately 6,867 properties valued at $748,865.