City gets $1 million for hotel 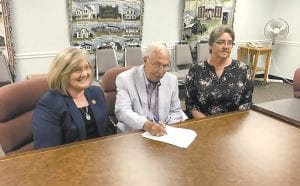 A million dollars in grant funds will enable the City of Whitesburg to make immediate and urgent repairs to stabilize the historic, brick Daniel Boone Hotel, which represents the city’s rise after the arrival of railroads and the opening of the region’s coalfields.

Built around 1920, the hotel served as a centerpiece for the city until it closed in 1970.

The building was then used for office space until the doors permanently shut in the early 1980s. Since its closure, the building has developed leaks, making it structurally un- stable.

With the help of a new $500,000 grant from the Appalachian Regional Commission and another $500,000 from a Department of Local Government grant, Mayor James W. Craft says the city plans to start restoring the hotel.

According to the city, the hotel is a central component of Whitesburg’s economic development future and revitalization plans. After the structure is stabilized and renovated, it will be a regional destination and economic driver.