City gets $500,000 to start rebuilding its historic hotel 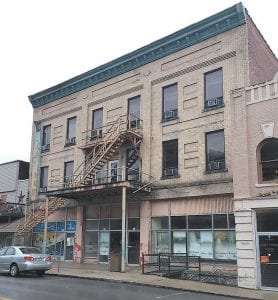 The Appalachian Regional Commission has awarded $500,000 to the City of Whitesburg to help stabilize the city-owned Daniel Boone Hotel on Main Street.

In what it terms the “Whitesburg Daniel Boone Hotel Stabilization project,” the ARC said the funds “will be utilized to make immediate and urgent repairs to stabilize the historic, brick Daniel Boone Hotel — which represents the city’s rise after the arrival of railroads and the opening of the region’s coalfields. The hotel is a central component of Whitesburg’s economic development future and revitalization plans. After the structure is stabilized and renovated, it will be a regional destination and economic driver. The project will create 23 jobs, leverage $2,000,000 in private investment, and will attract 9,900 additional visitors annually to the area.”

The money being allotted to Whitesburg is among 28 grants totaling nearly $26 million to help and diversify the economy. These 28 awards are projected to train more than 7,300 workers and students impacted by the changing coal economy in certificate, credentialing, and other workforce development programs. They will also create or retain more than 2,500 jobs, leverage an additional $31 million from public and private investors, and “create a more vibrant economic future for Appalachia’s coal-impacted communities,” the ARC says. 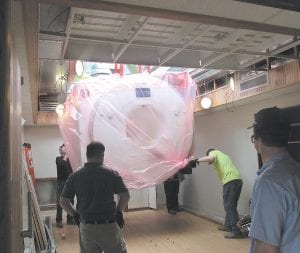 Workers prepare to set the MRI machine as ot arrives intothe “suite” through a hole in the roof. ARH says the project costs $3.8 million.

“ These investments capitalize on the growing momentum for a diverse economy in Appalachia,” said ARC Federal Co-Chair Earl F. Gohl. “They are strategic, collaborative, and impactful projects making the Region more competitive in technology, manufacturing, entrepreneurship, broadband, health, and a variety of other sectors.”

The announcement builds on the $47 million ARC has invested since 2015 specifically to diversify the economy in the Region’s coal-impacted communities through the POWER (Partnerships for Opportunity and Workforce and Economic Revitalization) Initiative. The POWER Initiative is a congressionally funded, multi-agency strategy bringing federal resources directly to help communities and regions that have been affected by job losses in coal mining, coal power plant operations, and coal-related supply chain industries due to the changing economic of America’s energy production. With the latest announcement, ARC’s dedicated funding for economic diversity in the Region’s coal-impacted communities is projected to create or retain more than 6,500 jobs and leverage an additional $132 million into the Region.

Whitesburg Mayor James Wiley Craft said the $500,000 grant from the Appalachian Regional Commission will be combined with a second $500,000 the city expects to receive for the hotel project.

“The first thing is to put a new roof on it, to get the leaked stopped,” Craft told WYMT-TV in Hazard Tuesday night. “Once we get it serviceable, it will create a Downtown Whitesburg that is compared to none.”

Craft said they plan to begin stabilizing the building in late spring or early summer.

Craft also said he does not know how long it will take to fully restore the hotel, as they still need to raise about $4.5 million for the project.

According to information filed with National Register of Historic Places, the three-story hotel was built in 1915 and was the “largest of several hotels in downtown Whitesburg and a popular stop for salesmen traveling through the area. The hotel lobby had a bank of a dozen or more telephone booths along the east wall for guests to use and for salesmen to call in orders. The three-story brick building is significant as a generally intact example of vernacular hotel design, representing the rise of Whitesburg after the arrival of the railroad in 1914 and the opening of the region’s coalfields.”

Among the other grants approved are:

The ARC award will enable three Eastern Kentucky education institutions—Big Sandy, Hazard Community and Technical College, and Southeast Kentucky Community and Technical College— to launch a comprehensive, employer-driven workforce development program focused on building the digital economy and strengthening digital innovation and entrepreneurship across a 16-county region in eastern Kentucky. The consortium—in partnership with Shaping Our Appalachian Region (SOAR) and the Eastern Kentucky Concentrated Employment Program (EKCEP)—will establish educational programs that develop workforce skills in emerging regional career clusters such as cybersecurity, medical coding, and advanced manufacturing. The program will specifically engage dislocated workers from the coal industry through targeted advertisements, and will provide adult basic education as needed to ensure that these individuals can participate in the training courses. In addition, to support the development of a technology-driven economy beyond classroom training, the program will identify and promote a number of digital innovation hubs, providing facilities and resources to encourage entrepreneurial activities. Success coaches will be available to instill critical 21st century skills and provide support to nascent technology workers, and a Regional Committee will be established to monitor industry trends and best practices. The project will serve 300 trainees and improve the operations of 30 existing businesses in the first two years of the award, and will lay the groundwork for the development of a vibrant and lasting digital economy in eastern Kentucky.

ARC funds will be used to construct a 14,700 square foot facility at HCTC’s Lees College Campus in Jackson that will deliver job training and credentialing courses focused around four emerging regional career clusters: information technology, telemedicine and health sciences, mechatronics, and eco-tourism/small business development. The project will leverage the capacity of the Eastern Kentucky Concentrated Employment Inc. (EKCEP) and the Kentucky Career Center to promote and market the program to out-of-school youth and displaced and underemployed workers impacted by the decline in the coal industry. The project will serve a seven-county area in southeastern Kentucky, and will train 295 dislocated workers and credential 228 students over the life of the award

MCTC will partner with Southern West Virginia Community and Technical College to deliver comprehensive training courses in small-air drone operation to a seven-county area in southern West Virginia and a 13-county area in northeastern Kentucky. Specific training activities will enable graduates to operate drones and drone sensors to provide in-demand commercial services — such as the close-up inspection of fixed structures like power lines, utility poles, and cell phone towers. The project will serve 100 trainees over the two-year life of the award, will leverage $14,000,000 in private investment, and will, in conjunction with a previous ARC POWER award, further strengthen the emerging drone industry cluster in the West Virginia-KentuckyVirginia tri-state area.

The ARC award will capitalize a loan fund to enable Kentucky Highlands to invest in local entrepreneurs at both the start-up and expansion stages of companies located across 21 southeastern Kentucky counties. In addition, ARC’s award will engage the Appalachian Community Federal Credit Union (ACFCU) to expand their portfolio of financial literacy services to the project’s service territory. Specifically, ACFCU programs will increase financial knowledge, security, and wellness through the provision of credit builder loans, debt consolidation loans, payday alternative loans, affordable non-prime auto loans, and 80/20 mortgage loans. The project will create or retain 200 jobs and leverage $2,250,000 in private investment.