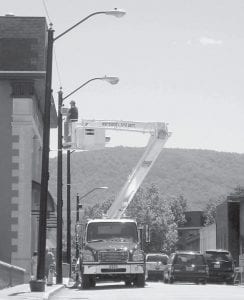 INSTALLING SPEAKERS – Workers were busy on Main Street in Whitesburg Tuesday installing components of a new citywide public address system. The speakers will be in use for the city’s Fourth of July celebration. (Eagle photo)

The City of Whitesburg will begin the new fiscal year with a substantial budget surplus and a larger city with a better defined sense of the city’s boundaries. In a unanimous vote, the Whitesburg City Council adopted the 2008- 2009 budget, which features a surplus of $375,761. The city’s total budget expenditures for the new fiscal year are $1,444,905. The city budget is available at City Hall for public viewing. Expenditures on the wastewater plant are not included in the above figure. The plant is funded by grants and loans and funds are in place and have been appropriated for construction.

The council also voted to accept County Surveyor Richard Hall’s redrawn city maps for the current city limits. Hall told the council the maps bring the city into compliance with U.S Geological Survey requirements and those of the Secretary of State of Kentucky. Hall said he would bring the first maps of the areas to be annexed to the July meeting.

The council voted unanimously to accept the bid of Nesbitt Engineering of Lexington and Hazard to provide engineering and architectural services for the installation of the city’s pedestrian walkway across the Kentucky River. Mayor James Wiley Craft told the council a committee consisting of council members Perry Fowler, Sheila Short, and Jimmy Bates had scored each bid individually and Nesbitt had received the high score of 285. Summit Engineering, project engineers for the new wastewater plant, came in second with a score of 259. Bates moved that the council accept the high scoring bid and Nesbitt was awarded the contract.

Mayor Craft thanked Bates, Short, and Fowler for their work on the scoring and said they had worked independently and without consultation to arrive at their scores. Craft said the city had received a total of eight bids for the project. He thanked each company presenting a bid and commented on the high quality of the bids as well as the work done by the committee. Craft also complimented the work done by Hall. Score sheets for the bids will be in City Hall for public view and comment.

“You’ve done a good job,” said Craft. “We will end up with a single map for the new annex and city limits so I can distribute it to the police department, fire department, and county court clerk.”

In other business, Kevin Howard of Summit Engineering reported that both Smith Construction and H20 Construction are doing a good job on their respective pieces of the construction of the new wastewater plant and sewer lines to Whitco. Smith, which is doing the actual plant construction, is still focused on pouring reinforced concrete. Howard said although he wished the project was further along, it should be finished by Nov. 26, 2009, the scheduled contract finish date.

“I wish other trades were on the job,” said Howard. “Masons, pipefitters, electricians, we’re assured those crews are on the way. They should be here by the first week of July.”

Howard also reported that 37 homes in the Whitco area have signed up for sewer service on a voluntary basis. That is 60 percent of the homes eligible for service. He said the Whitco project could be finished well before the agreed-on date, but both projects must be finished on Nov. 26 to satisfy contract and state requirements. The council voted to pay invoices from Smith, H20, and Summit for work done so far.

. The council voted unanimously to approve the Second Reading of Budget Amendment Ordinance 2008- 3, which accepts unbudgeted funds and expenditures.

. Mayor Craft told the council new city stickers will be due in July. The stickers will cost $7.50 for the first one and $5 for all others. Craft said everyone who lives or works in the city will be required to have a city sticker and the fine for non-compliance will be heavy. He said he expects a substantial increase in revenue over last year from city stickers.

. Craft told the council installation of a speaker system in downtown Whitesburg will begin this week. He said the system will be available for use in time for the city’s July 4 celebration.

. Craft reported all current license holders for alcoholic beverages have re-applied for their licenses except for Starlite Café.

. New landscaping at the city’s walking track and park is finished and hydroseeded. Mayor Craft said outlets and water hydrants have been added for vendors and two four-inch pipes were run under the track for electrical connections for the city stage. Craft thanked Letcher County Judge/Executive Jim Ward for his help and for the loan of county equipment to finish the project. He said the work could not have been accomplished otherwise.

. Mayor Craft read a letter from Letcher County Schools Athletic Director Ozz Jackson thanking the city, along with the Letcher County Department of Parks and Recreation, for their efforts in restructuring the city tennis courts. Jackson wrote that the 14th Region Tennis Tournament, hosted by Letcher County Central High School and the city, had been a tremendous success.

. Veolia Water reported repairing 13 fire hydrants from a list supplied by Assistant Fire Chief Gary Mullins. It also relocated the meter at the city park so all water will be metered. Steve Taylor presented the report in Jeff Kilgore’s absence. Taylor also reported installing a new transducer at the John High Lift Station, adding odor control at the New School Lift Station, and repairing a hole drilled into a three-inch sewer line beside Williams Eye Center by American Electric Power. Taylor said he did not know if AEP had asked about the pipe’s location or not.