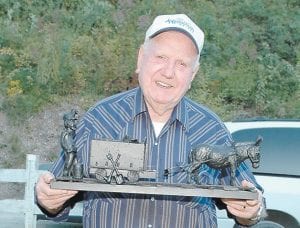 35 YEARS UNDERGROUND — Ernest Anderson, 80, of Jenkins, was honored by the City of Whitesburg on Labor Day for working 35 years in the mines. Thornton resident Windus Collins, 61, received an award for working most years underground (41). (Photo by Chester Flint)

The City of Whitesburg honored coal miners on Labor Day by giving away gifts donated by local businesses.

Whitesburg Mayor James W. Craft estimated that the City gave away around $3,000 in merchandise to retired and working coal miners at River Park in Whitesburg on Sept. 6. Prize packages included dental exams, gift certificates to local restaurants and savings bonds.

“I really want to thank all of the merchants that donated all of those great gifts,” said Craft.

Coal miners who attended the Labor Day event were eligible to win prizes. Awards were given to the youngest and oldest coal miners as well as the miner who has worked the most years.

“It was a very successful outing,” said Craft. “The coal miners are the backbone in the coal mining industry. Without coal mining what would we have?”

Anthony Hall, 30, was the youngest coal miner. He has worked nine years in mines.

“When I first went to work I was too young to go inside the mine,” said Anderson. Anderson said he was 13 years old when he started cutting timber with ax at Jones Branch in Jenkins.

“Then Mommy had to sign for me to go into the mines,” said Anderson.

Anderson started working in the mines at age 16.

His last job was working as a maintenance man repairing heavy equipment for Beth Elkhorn.

Windus Collins, 61, of Thornton, received an award for working the most years. He has worked 41 years in the mines and plans on retiring in July. Collins is a roof bolter at an Enterprise coal mine.

“All of my family has been coal miners,” said Collins. “One of my sisters was a coal miner.”

Collins said his first day of work was Nov. 11, 1969 at Scotia. He carried blocks and made mortar for the first few months he worked.