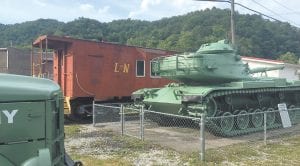 The caboose, which is now locked tight, is partially hidden from view by a display of military equipment.

Whitesburg Police are investigating after a video posted to Facebook showed used needles other drug paraphernalia inside the railroad caboose on display near the Letcher County Veterans Museum.

The city has now locked up the caboose to prevent any further abuse.

Police said the city street department cleaned up the mess, which they said included dirty needles, burned spoons, and cups of urine. Police Chief Tyrone Fields said the paraphernalia was apparently used for methamphetamine use, though there was no evidence that the drug had been made in the caboose.

The caboose was moved onto the site on the old railroad right-of-way around 1990, after CSX pulled up the old rails in the late 1980s. The caboose, located near where the old Whitesburg Depot once stood, was painted red and outfitted with L&N (Louisville and Nashville) markings to commemorate that railroad’s history in town, which last nearly 70 years.

The original intent was to use the caboose for a tourism office, but that never materialized. Instead, the caboose was left unlocked and used as a display for anyone who wanted to tour it.

Over the years, it has been used as a place to bed down by homeless people and recently had become a magnet for addicts. There is no attendant at the caboose, and it has remained open day and night. When the Facebook video surfaced last week, the city sent crews to clean up the used needles, trash and other items, and locked the caboose. The public will still be able to walk around the old train car to look at the outside, but will not be allowed inside.