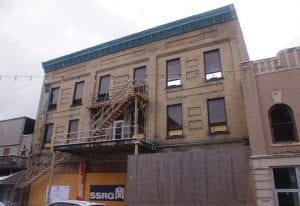 In photos above and below, workers have nearly completed the first phase of renovations of the Daniel Boone Hotel, and expect to have the roof on within the next two weeks. About a third of the roof is already done, and workers are framing floors and weight-bearing walls now.

Mayor James Wiley Craft said Codell was chosen through a competitive process and asked the council to authorize creation of a contract. Codell was also the construction manager for the Letcher County Recreation Center, numerous judicial centers, and the historic restoration of the Muhlenberg County Courthouse.

The council also voted to choose Judd Hubbard of Mt. Sterling as Phase II architect for the Daniel Boone Hotel Restoration. Hubbard was chosen through a process of scoring bids that had been submitted, and was overseen by the Kentucky River Area Development District. Paul Nesbitt of Nesbitt Engineering, which has played an important role in obtaining funding and the early phases of the hotel restoration, praised the decision to choose Hubbard for the second phase of the work. Nesbitt said Hubbard is an excellent architect and added that his company has worked with Hubbard on a number of projects. 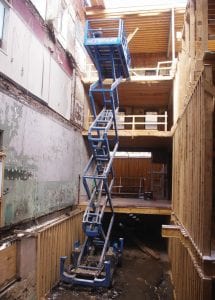 Bill Richardson of Richardson Associates, which has already designed most of the building and has designed about 30 buildings in Whitesburg, including renovations of City Hall and the Letcher County Courthouse, applied for the Phase II job, but said he was not interviewed.

Nesbitt also said the Appalachian Regional Commission has announced that it will award the City of Whitesburg $1.3 million to lay new water lines along the Whitesburg bypass and to rehabilitate the Sawmill Water Tank, in West Whitesburg. The bypass water lines have been a constant source of leaks for the city and the project was at the top of its list for 2020. The ARC award means the city will not have to incur new debt to accomplish the two projects. Both had been submitted to the Kentucky Infrastructure Authority as part of a loan package.

Nesbitt sounded a hopeful note about the possibility for near total funding for the Daniel Boone Hotel Restoration Project. Nesbitt said that representatives of the United States Economic Development Authority had recently spoken highly about the hotel restoration project as part of a program to foster economic development in communities that have been flooded. Nesbitt said there is the possibility of a 100 percent grant if the project is chosen and added that an EDA rep said he would like to fund the renovation.

In response to Councilman John Pellegrini, Mayor Craft also commented on several buildings in the city, which are considered eyesores. Craft said he recently spoke with former Letcher County Attorney Harold Bolling, whose wife Mary owns the old Salyers Building. Craft said Bolling told him he has three potential buyers for the structure and the issue should be settled this summer.

Craft said he takes great pride in the appearance of the city and said he gets a lot of compliments from visitors on the city’s beauty. He added that he is particularly concerned with rundown buildings.

Paul Nesbitt, the engineer, pointed out comments Matt Jones, creator of the Kentucky Sports Network, recently made concerning the city. Jones, who has been a frequent visitor here, said he had been driving on US 119 recently and stopped at an overlook where he was struck by the beauty of the city and its surroundings.

In a twitter comment in July, Jones wrote that he had been disappointed over news that he would not be able to host his television show, “Hey Kentucky” on Lexington Channel 18 during the elections. However, Jones said his spirits were lifted after he pulled to the side of the road and saw the view from Pine Mountain. The news concerning the television show came as the result of a complaint by the state Republican Party as Jones considered entering the Democratic Primary for U.S. Senate.

In other business, Craft announced that after a competitive bidding process overseen by KRADD, Nesbitt Engineering has been awarded the contract as project engineer of the Mayking Sewer Project. Craft also said the city will work with KRADD to address the issue of annexation of those parts of Mayking that wish to be annexed. Annexation will mean that the areas will be eligible for city services such as police and fire protection. The city already provides treated water to Mayking residents in the old Golf Course area.

When the state funded the extension of city water and sewer lines to the State Highway Garage in Mayking, water lines were run to the Golf Course area, but sewer lines were terminated at the garage. The agreement to provide water contained a stipulation that Mayking residents could request sewer service after 15 years. In August, residents of Mayking attended a council meeting and asked the council to consider extending sewer lines to serve their area.