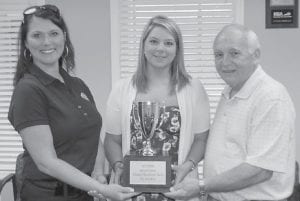 The City of Jenkins was a leader in recruiting volunteers during the annual PRIDE Spring Cleanup in 38 counties of southern and eastern Kentucky, according to PRIDE.

Jenkins won the Volunteer Recruitment Award for increasing its Spring Cleanup volunteers from 2011 to 2012 more than any other city in the region.

“Jenkins reported an impressive 81 Spring Cleanup volunteers in 2012, after recruiting no volunteers while taking a break from participating in the Spring Cleanup in 2011,” said PRIDE’s Tammie Wilson, who presented a trophy to Mayor G.C. Kincer.

“ I commend Mayor Kincer, PRIDE Coordinator Mason Tackett, and the city council members for leading this award-winning effort,” Wilson said. “You recruited a strong team of volunteers, who picked up 379 bags of trash, making a visible difference in Jenkins.”

“I want to thank each and every volunteer who joined the effort to make this community and our entire region look its best as our tourism and recreation seasons started,” Wilson added. “Across the region, I saw so many people — young and old — who enjoyed working together in the great outdoors, taking great satisfaction in a job well done.”

Region-wide, 26,711 volunteers participated in the Spring Cleanup. They picked up 50,042 bags of trash from the region’s ditches and shorelines. The region’s counties and cities reported collecting a total of 3,037 tires, 3,000 tons of trash, 81 tons of recyclables, and 9.5 tons of appliances.

During the annual Spring Cleanup, local governments organize cleanup activities and recruit volunteers to remove litter across 38 counties in southern and eastern Kentucky. They receive volunteer T-shirts, cleanup supplies, and funding assistance from PRIDE, a nonprofit organization that promotes environmental cleanup and education in the region.

Photos of PRIDE Spring Cleanup volunteers can be seen at www.facebook.com/ EasternKentuckyPRIDE.