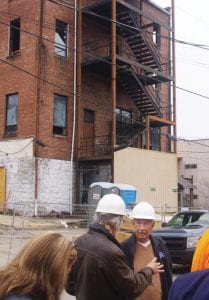 The sound of construction equipment was joined by “oohs” and “ahs” as Whitesburg city officials toured the interior of the Daniel Boone Hotel for the first time after nearly three months of demolition and reconstruction.

City council members, the mayor, grant writers and others were all wide eyes and big smiles after they walked through a gaping access hole cut into the stone foundation of the century-old hotel and got their first peek at the reconstruction project inside.

“I was actually amazed at the amount of work that has been done, the condition it started in and the condition it was in when I saw it,” Mayor James Wiley Craft said. “I was also amazed that they had started some of the reconstruction that will stay in place.”

Much of the building’s roof and about the first third of all three floors collapsed into the basement last year, and crews have been removing debris, stabilizing what’s left and building it back into a new hotel for downtown. By last Tuesday, when the tour took place, the front section had been stabilized, floors installed through the third floor, and structural beams and roof decking put in place. In the rear, walls had been demolished to the bare studs, sheer walls had been built to prevent the building from flexing, and in the middle section, workers had begun building back the studding that will eventually become a meeting room. Only one section of sagging floors and roof remains, and that will be removed from the top down and rebuilt once the section of floors behind it is completed.

“I’m really excited about it,” Councilwoman Sheila Short said. “You know we started this when I first went in office, right after the mayor.”

Last Tuesday, council members got to go through the entire basement, see the exposed stone in an exterior stairwell under the sidewalk, walk on the newly installed sub-flooring on the street level, and get a feel for the 15-foot-high lobby ceilings. Finally, they climbed the rear fire escape and toured the old section of the hotel, which did not suffer damage in the collapse and will be tied into the new structure being built now. Short was taken with the 100-year-old floors in the rear of the building.

“I hope to see them leave that hardwood floor,” she said. “I doubt it, but I really hope they can save that. It will be a beautiful place.”

The decade-long project to restore the building never took off because grant money wasn’t available, but that changed with a $1 million Appalachian Regional Commission grant last year.

Short said she hadn’t been in the building for close to 40 years, but had seen the collapsed structure through the front windows.

“Everybody involved is looking forward to it. I hope we can see it completed, those of us who started it,” she said. “To me, this is the most exciting thing we’ve been involved in.”

Councilman Derek Barto said he was impressed by the work, and said he thinks the finished hotel will have a great impact on the city because it will provide much-needed space for visitors to stay when they come for concerts and festivals.

“It’s also a lot bigger than I thought it was,” he said. “I didn’t expect that at all. It doesn’t look that big from the street.”

The hotel is the largest building in downtown Whitesburg at three stories plus a walkout basement, but it doesn’t appear to have captured much of the public’s attention. Bill Richardson, the architect working on the project for the city, said the building will have 42 guest rooms when it’s completed, the same number as The Sire Hotel (formerly the Gratz Park Inn), a boutique hotel owned by Hilton Hotels in Lexington.

Councilman Larry Everidge said he was pleased to see the amount of work that had been completed on the building.

“I was really surprised by the progress they’ve made on it. I guess what took so long is what will take longer, looking at the grants,” he said. “I’d say they could complete it in 12 or 18 months if the money was lying in the bank.”

While the city is using a $1 million grant to stabilize the building and get the basic structure built, Richardson said estimates are now as much as $5.5 million to finish it. The city is looking for all of that money in one lump sum so it won’t have to do any more phases of construction.

The city has to seek proposals from architects for the second phase, and Richardson is putting in a proposal for that work as well.

Everidge, Barto and Short all said they expect the building to be a great addition to downtown. Everidge and Short, who have been on the council the longest, said they’re happy with the progress the city has made, but the hotel is another step in the direction the city needs to go.