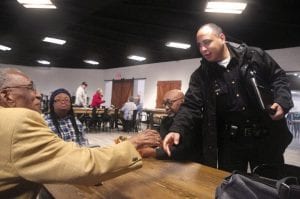 Martin Luther King Jr. dreamed that one day a man would be judged not by the color of his skin, but by the content of his character.

“ This is part of the dream, right here,” the Rev. Steve Peake said, introducing Whitesburg Police Chief Tyrone Fields at the Martin Luther King Day luncheon in Whitesburg on Monday.

Fields, a 32-year-old father of three, never mentioned race during his keynote address, but in 2011 he was named the first biracial police chief of Whitesburg. In the 2010 Census, the white population of Whitesburg was 2,094; the population of people of two or more races was 7.

Fields said he grew up at Thornton with a brother and a sister and a single mother. They moved to Whitesburg when he was 11, and it was “the big city.”

“I was able to ride my bicycle into town every day. One day I was riding my bicycle past Everidge Funeral Home and I stopped,” he said.

“For the next several years, I would hang out there at the funeral home at 11 or 12 years old, and I liked it,” he said.

Fields said he knew from an early age that he couldn’t rely on anyone giving him anything, and he would have to work for everything he got. He said he also learned to treat everyone with respect, and to be loyal.

“I knew I wanted to work, and I wanted to make money. I was 17 and everybody else had cars and I was still riding a bicycle,” he said.

Fields dropped out of high school, and started working on his GED and at any job he could find that would pay him a few dollars.

He stopped at the late Paul Mason’s car lot, and was looking at a Chrysler Sebring with only 12,000 miles when Mason’s son, Mark, came out and asked him how much money he had to spend.

Fields said he only had $500 and he knew he had to buy insurance, so Mason told him to come inside, sign some paperwork, and keep the $500. Before he left, Mason gave him $100 for the bicycle he rode onto the lot.

Fields met his wife when he was working as a security guard at Alice Lloyd College, and the two married. He quit his job and went to work for the street department in Whitesburg around the first of October because the city wouldn’t hire him as a police officer at first. By the end of October he was a part-time patrolman, a full-time patrolman by Thanksgiving, 2008, and in 2010 went to police academy. He graduated from academy that June, and was appointed assistant chief, then acting chief shortly after that. He was officially named chief in September 2011.

About two dozen people attended the luncheon gathering, held in the Cane Kitchen at the old Whitesburg High School.

It was a considerably smaller crowd than last year, after the meeting had to be pushed back from its usual breakfast time.

The Rev. Steve Peake, of Fleming-Neon, thanked Cowan Community for continuing to plan the event, which has done for about 20 years. Without it, Peake said, “the ball would have been dropped a long time ago.”

“The black community in Letcher County is fading,” Peake said. “In my little town of Fleming, there are two families left.”

The numbers are low in Tom Biggs Hollow in McRoberts as well, but Bishop Willie Lamb, 94, attended the celebration on Monday as he always does. Lamb said there are about 20 black people left in Tom Biggs Hollow, where Consolidation Coal segregated the black miners who worked for the company.

Lamb’s parents moved to Letcher County in 1905 from Alabama, and raised 15 children here. He and his late wife Joanna raised seven children at Tom Biggs. All of them but one son left Letcher County, but Lamb, a retired UMW miner, never had the desire to move somewhere else. In his invocation Monday, he thanked God for his home.