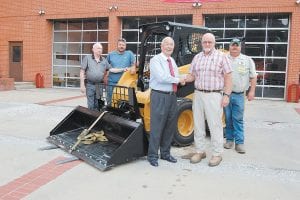 This Caterpillar skid steer loader was purchased for the City of Whitesburg Recycling Center with funds received from the Kentucky Division of Waste Management. The grant proposal was written and submitted by Chris Caudill and Ken Sexton Jr. An industrial shredder will also be bought with the grant funding. Pictured are left to right Whitesburg City Council Member Jimmy Bates, Chris Caudill, Mayor James W. Craft, Richard “Baja”Pratt with Whayne Supply Company in Hazard, and Ken Sexton Jr.

The City of Whitesburg has taken another step toward rebuilding the old Daniel Boone Hotel by applying for a $6 million grant from the federal Appalachian Regional Commission.

Paul Nesbitt of Nesbitt Engineering told the council at its July meeting Tuesday night that rather than apply for the funding in phases, the state Department for Local Government has recommended the city apply for the entire amount it would cost to refurbish the threestory building that for years housed Mountain Comprehensive Health Corporation’s Whitesburg clinic.

In other business, Robert Campbell, owner of Letcher Funeral Home, approached the council and asked that action be taken against the owner or owners of an old stone building located across from the funeral home. He said the building is a beautiful example of the stonework around Whitesburg, but in its current state is a dangerous eyesore. Campbell said that windows have fallen out onto the city streets and that once, a window pane went through the top of a car parked on Main Street. Mayor Craft said he would write letters to the owners of that building and several other dilapidated buildings in town informing them that the city will take action if they do not do something to take care of their property.

The council also learned the city has been reimbursed in the amount of $25,000 by the Federal Emergency Management Agency for damage caused by ice to a low-water dam near the city water plant. Water Maintenance Director Chris Caudill told the council that the dam is currently under repair and measures are being taken to prevent a similar occurrence.

In response to a question from Mayor James Wiley Craft, Caudill said that things are going very well at the city’s recycling plant at Big Cowan, mostly because the price for recycled cardboard and metal have both gone up. Craft encouraged everyone in the city as well as county sanitation customers to recycle and use the center. He and Caudill both said that recycling saves the city and county money by keeping recyclables from going into the landfill and in the possibility of selling the recycled material. In response to a question from Councilman Larry Everidge, Craft said he has looked at allowing blue bags for recycling to be sold at City Hall, but the city pays no sales taxes and it creates problems for it to sell anything it has purchased.

In addition to asking for full participation in recycling, Caudill said the city would pick up recycliable metal and appliances inside city limits. Call 633-2266 to arrange pickup. Mayor Craft praised Caudill for his work at the center and the city water and sewer works as well.

In other business, the city council voted unanimously to renew the town’s contract with Air Med Rescue for helicopter medical evacuation service for citizens of Whitesburg. Citizens who wish to participate pay $35 and the city pays the remainder of the fee.

Craft also reported that the Fourth of July Celebration, including the concert by country musician Lorrie Morgan, went very well in spite of the stormy weather. He said the fireworks were spectacular and that Morgan was very pleased with the city’s cooperation. Craft praised city employees and members of the Volunteer Fire Department and all others who helped with the event.

Lee Anna Mullins of the Mountain Heritage Festival Committee asked the council for space for a carnival for the festival. She said that the space at the old Whitesburg High School is no longer available and asked for the use of the parking area across from the James Bates Memorial bridge to locate part of the carnival for children’s rides. Mullins also asked to use the lower parking lot at the end of West Main Street for the adult rides and attractions. The council voted to allow the festival committee to use the two lots.

Craft also thanked Mullins and Jolinda Wright for the care they take of the flower pots located in downtown Whitesburg.