Action against Starlite Café taken after raid and arrests 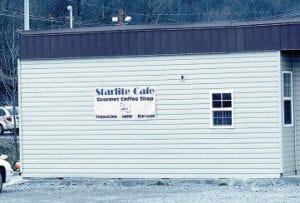 The Starlite Cafe, owned and operated by Anthony Cowden, has temporarily lost its “limited restaurant alcoholic beverage by the drink” license after three people were arrested and several received alcohol-related charges at the establishment.

The City of Whitesburg on Monday temporarily suspended the Starlite Café’s license to sell alcohol, two days after after three people were arrested and several others were cited on alcohol-related charges.

Anthony Cowden, owner of the West Whitesburg establishment, has been ordered to appear before the state Board of Alcohol Beverage Control (ABC) in a hearing that will determine whether the board will suspend, revoke or let Cowden keep his state alcohol license. The date of the hearing had not been set at presstime.

“Because of the nature of the charges we felt it was imperative that we immediately suspend his citygranted alcohol license because the state process takes a significantly longer time,” said Whitesburg Mayor James W. Craft. “Although we weren’t forced to do so we felt that it was better to suspend the license pending the outcome of the state proceedings.”

Cowden, 56, of 86 Hampton Branch, Whitesburg, was charged by ABC agents on February 2 with selling both draft beer and bottled beer to a customer, Jimmy D. Morris, who was already intoxicated. According to the citation, Cowden served Morris, 41, of 113 Maple Street, alcohol at 10:10 p.m. even though Morris was obviously drunk and had been drinking at the Starlite Café since 11 a.m. that day.

An ABC investigator wrote on Cowden’s citation that Morris “was obviously intoxicated, had slurred speech, bloodshot eyes. If he had left the premises he would have endangered the public and himself.”

Cowden was also charged with four counts of maintaining disorderly premises. According to the citation, two of the counts were for alcohol intoxication by customers, and one count was for unreasonable noise (a band performing in the restaurant could be heard at the other end of the Parkway Plaza). The fourth count was added because a patron was found to be possessing a controlled substance on the premises.

Vanessa C. Cruz, 32, an employee of the Starlite Café, was charged February 2 by the Letcher County Sheriff’s Department and ABC with selling an alcoholic beverage to persons under the age of 21. According to the citation, Cruz has completed server training in alcohol regulations provided by the ABC.

Cruz, of 86 Hampton Branch, Whitesburg, was charged by the ABC with selling several draft and bottled beers to Morris.

According to the citation, Montgomery was attempting to leave the Starlite Café while extremely intoxicated when he was stopped by an officer and patted down. The officer found a Ziplock bag containing eight hydrocodone tablets in a pocket of Montgomery’s pants.

David Collins, 24, of 1649 Smoot Creek Road, was arrested by the ABC and was charged with alcohol intoxication in a public place.

Sarah J. Davidson, 28, of Perry County, was charged with alcohol intoxication on February 2 after Whitesburg City Police found her in a vehicle at 239 Michigan Avenue in Whitesburg. According to the citation, Davidson told police she had been drinking alcoholic beverages at the Starlite Café and received a ride from an unknown male. Whitesburg Police Officer Jeff Hamilton wrote in the citation that Davidson said she did not know how she arrived at Michigan Avenue. The citation said she was wet from head to toe.

Matthew B. Hatton, 20, of 429 Hiram Bailey Loop, Letcher, was charged by the ABC with entering the premise as a minor to purchase alcohol and possession of alcohol by a minor.

Starlite employee Ashley N. Collier, 20, of 178 Alaska Avenue, Whitesburg, was charged by the ABC with possession of an alcoholic beverage by a minor.

Craft said the Starlite Café is the only restaurant with an alcohol license about which the city has had complaints. Las Penas Mexican Restaurant, Pizza Hut, Summit City and The Courthouse Café also have alcohol licenses.

“This is the only establishment we have had any complaints about noncompliance,” said Craft. “We are sending a message that if you don’t comply with our ordinance and the statutes, you’re not going to be able to sell alcohol in the City of Whitesburg.”

Letcher County Sheriff Danny Webb also said he has never received a complaint about any other business that serves alcohol in Whitesburg.

Webb said his department had, however, received many complaints from community members about the Starlite Café.

“We kept getting complaints about DUIs, minors being served alcohol, drugs being sold, noise and domestic violence in the parking lot,” said Webb.