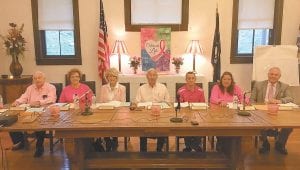 Speeders on Solomon Drive will soon see more police enforcement to protect children, pedestrians, and other motorists. At the October meeting of the Whitesburg City Council, Solomon Road resident Carl Banks approached the council and said that traffic is moving much too fast on Solomon and that with the increase in the number of children and residents there, it is creating a dangerous situation. Banks said that the population on Solomon has grown by three times since he moved there in the 1970s and many of the residents have small children who ride bicycles or play on the street. He added that most driveways open directly onto Solomon Road as well.

Mayor James Wiley Craft asked Banks if increased enforcement would help and Banks replied that he thought it would. He added that while city police officers respond quickly if they are called, for the most part only First District Constable Chris Caudill actually patrols the road. Mayor Craft said regular patrolling will begin immediately.

In other business, the council heard the first reading of a request from Kentucky Power Company to advertise for the renewal of its franchise agreement with the city. Greg Sparkman, district manager of the Hazard KP District, read the franchise proposal and said he will be at the next meeting for the second reading. The request calls for advertising and selling the franchise to provide electricity for the City of Whitesburg and states that the bidding will be advertised in The Mountain Eagle before it is sold at public auction.

Mayor Craft told Sparkman that since Kentucky Power is the sole provider for electricity in the region, the city has no alternative but to do business with it and said that neither he nor any of the council were present at the last signing of the franchise 20 years ago. Craft praised Kentucky Power representative Sheena Hensley, saying she is one of the best people the city works with and asked Sparkman how the city is compensated in the existing agreement. Hensley replied that while she isn’t certain of the exact figure, the city receives a percentage of the money back that it pays for streetlights as a rebate. She said she will check on the exact amount and have it ready for the next meeting. Craft asked Sparkman if there is a way the city can negotiate a better rate and Sparkman said he will find out.

Craft said that under no circumstances does he want to add to residential bills, and his only objective is to get the best rate for the city in the franchise agreement. The second reading of the agreement will be conducted at the next council meeting.

Paul Nesbitt of Nesbitt Engineering reported that efforts to secure funding for the renovations to the city water plant and the old Daniel Boone Hotel are underway and that while the situation looks promising, Nesbitt cautioned that until everyone signs on the bottom line, nothing is certain. Mayor Craft asked if things don’t look very likely and Nesbitt replied that they do, but that there are no guarantees until a deal is actually complete.

Water Maintenance Director Chris Caudill reported that the city has experienced another month of good returns at the recycling center and said it is averaging sending cardboard out for recycling with a return of between $2,300 and $2,800 every two to three weeks He also said that city workers have repaired some leaks on the main water line and the city has experienced several potentially expensive problems with the sewer system, including a $28,000 pump that had to be removed and sent in for repairs. However, Caudill said the pump was diagnosed with possibly leak seals and the repairs will be much less costly than anticipated. He added that an inspection at the city water plant revealed that everything is working well.

Caudill also reported that he has inspected city fire hydrants and that at least three will need to be repaired, and possibly replaced. He said that replacing each hydrant will probably cost the city about $3,000 and added that the hydrants are so old that parts are hard to find. Mayor Craft asked that repairs be done in groups of three to keep from costing so much at one time.

In other city business:

• The council unanimously approved a roadblock for the Tree of Hope for Friday, November 4.

• The council voted in two separate votes to accept the donation of a 14X7-foot cedar cabinet freezer from the old Whitesburg High School from the Letcher County Board of Education, and then voted again to lease the freezer to the Mountain Shrine Club, where the freezer is currently housed, for $1 a year.

• Mayor Craft told the council that since the next meeting is scheduled of November 8, Election Day, the council has the option of going ahead with the meeting, changing the date, or canceling it all together. In a unanimous vote, the council voted to cancel the November meeting.

• Halloween Safe Night will be held in the City of Whitesburg on Monday, October 31, from 5 until 8 p.m. Mayor Craft said the event will coincide with the date and time of the Letcher County Safe Nite as well, and the council will give candy away in front of City Hall.

• In response to a question from Council Member Robin Bowen Watko, Mayor Craft said that the annexation of the remainder of the Solomon area will require another survey and a new map to send to the state.