City water bills raising for those who use most 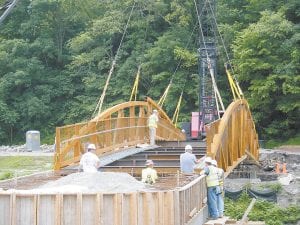 PEDESTRIAN BRIDGE COMING ALONG — Workers prepared to connect two spans of a pedestrian arch bridge in downtown Whitesburg last week after they were set in place by cranes. Whitesburg Mayor James Wiley Craft, who conceived the idea for the bridge, said it should be open by July 4. (Eagle photo)

The cost of water is going up for most homes and businesses which get their water from the City of Whitesburg.

The rate increases are being recommended by Veolia Water Company, which operates the Whitesburg water system. Veolia manager Todd Adams told the city council that the rate increases are designed to protect those who use the least amount of water, many of whom are on fixed incomes.

The council is expected to vote on the proposed increase at its next meeting. If more than twothirds of the council (four of six members) votes for the ordinance it will be passed. The new billing rates are expected to take effect on July 1.

Bills will be due and payable within 10 days from issue. A 1.5 percent penalty will be imposed on total unpaid balances and the city may serve notice of delinquency and a customer has 10 days to respond before the city may disconnect with no further notice. The reconnection charge for past due accounts will be $25.

• The council voted to accept the high scoring bid for engineering services to rebuild the city water plant. Nesbitt Engineering of Lexington and Hazard received the high score for its bid. The scoring committee consisted of Randy Hall, Gary Mullins, and Perry Fowler.

• Mark Kidd of Appalshop thanked the council for its help with closing city streets for the Seedtime on the Cumberland festival. Kidd said an economic impact study found that last year’s festival brought the city $260,000 in spending from outof town guests attending the festival.

• Mayor James Wiley Craft announced the city’s Independence Day Celebration will be held at River Park. Billy Joe Royal will be the headliner and there will be food booths and inflatables. The county has given the city permission to use the county park across the bypass (KY 15) from River Park to launch a fireworks display.

• The council voted unanimously to set the city’s property tax rate at .34 per $100 for real and personal property. Craft said the same rate has been levied for the last 100 years.

• The council voted to approve the second reading of the city’s proposed $2,696,463 budget for the 2009-10 fiscal year. The vote was unanimous and the budget is on file for public inspection at city hall.

• In his mayor’s report, Craft told the council that local artists participating in the Kentucky Heritage Quilt Project will be using an unused portion of the city fire station to paint quilt patterns on plywood. Craft said the quilt “squares” will be displayed around town.

Craft also told the council the monthly “Bike Night” held on the last Saturday of every month has been a huge success and thanked local and out-of-state motorcyclists for their participation.

In response to a question from Council Member Robin Bowen- Watco, Craft said that repair costs to the city water system from the recent contamination problems have been turned over to the city attorney for collection.

Craft also told the council he is considering closing the restrooms at River Park because of vandalism and replacing them with portable toilets. He said the cost of replacing broken sinks and toilets and cleaning the restrooms has become exorbitant.