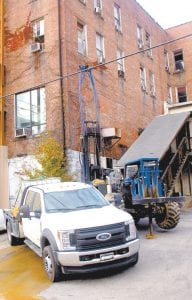 CORE DRILLING — Workers drilled seismic holes at the rear of the Daniel Boone Hotel building last Thursday to locate the bedrock under the foundations in preparation for cleaning up debris from the collapsed roof and floors, and bracing the building for new construction. The building is slated to be stabilized over the next few months, and the city is seeking new grants to renovate the historic hotel. (Photo by Sam Adams)

The Whitesburg City Council voted at its November meeting this week to advertise for bids for the first phase of construction on the renovation of the old Daniel Boone Hotel on Main Street.

Project Architect Bill Richardson of Whitesburg presented drawings to the council and suggestion a strategy for bidding the work that will allow the city government to proceed as needed money becomes available.

Richardson suggested the council present a base bid that will take care of the main priorities, such as steel infrastructure to support the roof and a completed roof. He said the city could attach alternative bids to the plan that would allow for things like an entertainment center and penthouse on the roof if the funding becomes available. However, if it doesn’t, work can proceed on a standard roof. Richardson said that federal grants do not allow for deductions once a project is bid, so by submitting the package with a base bid and alternatives, the council will be able to control the project according to the available funding.

“This way, we can do what has to be done,” said Richardson.

Kentucky River Area Development District Associate Director of Community and Economic Development Angelia Smith-Hall, who is managing the grants for the project, told the council the city will need to bid the entire package in one bid that includes the base bid and the alternatives. She said that way, the contractors will bid on one package. Richardson agreed and said it will be necessary for the same contractor to complete the entire bid, including whichever alternatives are chosen.

Paul Nesbitt of Nesbitt Engineering, who worked with the city to secure funding for the hotel project and also works on water and sewer projects, added that by bidding everything at once, the city can take care of its main concerns, which in this case is the demolition of floors that have collapsed, getting the old roof removed, hauling the debris away, installing the structural steel, and getting the building under a new roof. That will allow the rest of the work to be done in a dry space.

Mayor James Wiley Craft asked if the city could include window repairs in the base bid rather than as part of an alternative in order to make sure the interior stays dry. Paul Nesbitt agreed, and Richardson said he will include it in the base bid. The council then voted to authorize the bid for publication.

Richardson said he will work with the council, Nesbitt, and Smith-Hall to determine the order of the presentation of alternatives, and the actual bid should be ready for publication within two weeks. Councilman Derek Barto made the motion with the addition of adding window repairs to the base bid to be certain that the interior will remain dry and the vote was unanimous.

Water Maintenance Director Chris Caudill added that he had an inspector look at city water tanks recently after one tank near Letcher County Central High School had several leaks. Caudill said city workers drew the water level in the tank down below the leaks and the inspector determined that two of the three holes in the tank were made by bullets. Caudill said the inspector said city workers can repair the bullet holes and if the city tanks are refurbished, they should be good for another 30 years.

Caudill also said that all the usual problems of water leaks, pump failures, etc., are still taking place, but the biggest issue is the need for new vehicles. He said a couple of small trucks and two 3/4-ton trucks will be needed. Caudill recommended looking into leasing, with the prospect of rolling the leases over every other year. The council agreed and Caudill said he will look at the possibilities and bring a proposal to the next meeting.

The council voted to declare a number of old city vehicles surplus and dispose of them thorough a process of sealed bids. Mayor Craft said the vehicles are available for inspection at the new city wastewater treatment plant and bids will be accepted until November 30 at noon.

In other business, the council voted to participate in a grant with the Kentucky Department of Local Government to fund the development of the fivemile paved Tanglewood Trail that runs through the old railroad tunnel in Whitesburg and connects to the city’s walking track. Barto read Resolution 2018- 4, which allows the city to move forward with the work.

Steve Ruth, who is coordinating the 2019 effort, told the council that Whitesburg was the number one vote recipient in last year’s competition, even though it was competing in the same class with cities with populations of 150,000. Ruth said Whitesburg is currently in the top 10 and urged everyone to not only vote but to share the effort on social media and contact everyone they know and ask them to vote as well.

In order to vote, visit grant.levittamp.org/ voter- registrationpage/ and register. Councilman Mike Jackson, who served as the city’s liaison on last year’s series, said that anyone who voted last year will either need to remember the password used or re-set the password. Sign-in is done by providing an e-mail address and each e-mail address is allowed one vote. Ruth said more information is available at the Whitesburg Levitt Amp Music Series on Facebook as well. The deadline for voting is November 20 at 8 p.m.

The council voted to purchase three waste stations to implement the city’s pooper/scooper law that was passed at last month’s meeting. The stations will contain plastic bags for pet owners to pick up their pet’s waste and a disposal unit to place it in. Each unit will cost $175. Mayor Craft said they will probably need to purchase others when the Tanglewood Trail is complete.

Councilman-elect John Pellegrini attended the meeting and when asked for comments by the mayor, Pellegrini asked the council to consider what actions it can take to help control bears in the city limits. Chris Caudill told Pellegrini that he has looked into it and there is very little that can be done except to advise citizens to keep their garbage inside or in a bear-proof container until it is picked up. Caudill said the rubber bullets provided by Fish and Wildlife do little to deter bears and they are a protected species. Pellegrini said he hopes something can be done before someone has a dangerous encounter with a bear.