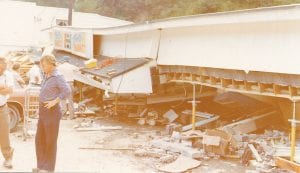 Above is the Thrifty Market, a store in downtown Jenkins that was destroyed after the water tank seen at left burst at the bottom on July 15, 1979, and sent 300,000 gallons of water onto the neighborhood below. An elderly doctor was killed when his home was splintered. Jenkins officials and residents are concerned that a natural gas well being drilled near the same location could cause a replacement tank to burst as well.

Officials say they would have kept a large natural gas well from being located on a hill above Jenkins if they had known the well would be drilled beside a water tank that has been a subject of concern since it was built nearly 30 years ago.

Contractors for EQT, formerly Equitable Resources, began drilling the well last week on top of a steep hill overlooking the west end of Main Street at Woodland Trail. The site is also home to a large water tank built to replace a similar tank that burst apart in July 1979 and caused the death of an elderly physician when the force of 300,000 gallons of water splintered his home and washed it from its foundation.

In addition to demolishing at Perry, who had been sitting on the front porch of his home listening to a Cincinnati Reds radio broadcast, the rush of water destroyed a large grocery store, a funeral home, and several automobiles.

Officials who met in Jenkins earlier this week to hear complaints about the gas well from Woodland Trail property owners still haunted by the tank collapse said they were surprised when they saw the drill rig set up so close to the tank. 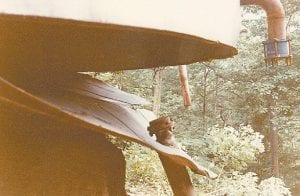 “If any of us had known this ahead of time, those gas wells would not be there,” said Magistrate Wayne Fleming, whose district includes Jenkins. “I fault Equitable for not notifying us ahead of time. We should have been notified.”

“If we’d have sat around and talked before we wouldn’t be sitting here now,” said Mayor D. Charles Dixon, who can see the drill rig and tank from a City Hall window. “It is of very much concern to the city.”

Dixon called the meeting held Monday afternoon after getting complaints about the location of the gas well from Woodland Trail residents who survived of the water tank tragedy.

“I live right down under that place,” DePriest told an audience that included Dixon, Fleming, Jenkins City Attorney Randall Tackett, and representatives of EQT and TECO Coal Company, which owns the property. “The grandkids are there a lot, and that’s what worries me. I would just like to see if we could just move that thing somewhere else.” 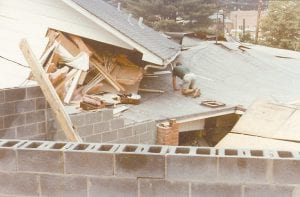 Jenkins businessman Jimmy Stallard, his wife, Alice, and their two children survived their house, shown upper left, being swept off its foundation and into a nearby store after a water tank on the hill above the house burst on July 15, 1979, and sent 300,000 gallons of water onto the neighborhood below. An elderly doctor died during the tragedy, and Stallard’s wife still suffers from an injury she suffered.

The gas well in question is the first leg of a planned five-leg horizontal well and is located near the edge of a drilling “pad” officials say is about the size of a football field. EQT representatives said that as of Monday, the well had reached a length of 8,000 feet with a vertical depth of 4,600 feet. As many as 11 wells are expected to be drilled on the site.

Jim Stallard, a Woodland Trail resident and former Jenkins councilman who also survived the 1979 tank collapse, attended the meeting armed with dozens of photographs showing the damage caused when the water rushed unimpeded through a seam which broke at the bottom of the thennew tank after it had been filled to capacity for the first time.

Tears formed in Stallard’s eyes as he described to city officials and EQT representatives how he and his wife and their two children survived the flood only because all four of them happened to be in the upper portion of their split-level home when the water swept through. The old photographs which show the remains of Stallard’s home and nearby grocery store depict scenes more akin to a Category Five hurricane than a broken water tank.

“It was devastating, fellows,” Stallard said. “Not only was a person killed, my wife still has serious injuries.”

Stallard said he fears the hydraulic fracturing of underground rock formations required to make gas wells produce, a chemicallyinduced process known as fracking, will be just enough to cause a small leak in a welded seam that could go undetected until enough of the sandy surface on which the tank sits is washed away and allows the structure to collapse in the same manner as before.

“It just opened up and it all came down the hill,” Stallard said. “If there’s any time to stop drilling these wells it’s right now. Naturally, they’ll all be fracked, and therein lies the problem. No one can guarantee it (the well) won’t be moved enough to happen again.”

EQT representative Maurice Royster said that well fracking is a “safe process” and will not damage the water tank nor threaten the residents living below.

“Obviously we feel like our location up there is very safe,” Royster said, adding later that the “movement of the earth and plate tectonics is more of a threat.”

After Royster said more “fact finding” is needed before EQT takes any action to stop drilling or relocate the well, Stallard asked that a company representative telephone his house to let him know when the first well will be fracked.

“Show me the decency to let me know so I can get out,” Stallard told Royster. “And I won’t be back. There should be no drilling that close to that tank. I am not going to sleep under that hillside.”

Stallard said that while natural gas drilling is one of “the least regulated industries” in Kentucky, he understands it is a valuable resource.

“I don’t mind you getting your gas,” Stallard said, adding that his father was an underground coal miner for 33 years. “You should be able to run your business. You just have to do it in a safe manner, and I question if this is a safe manner.”

City Attorney Tackett suggested that EQT pay for an engineering study to determine whether the drilling and fracking could pose any danger.

Royster said the company “will financially support whatever we need to do to move forward,” but that he couldn’t “tell you we’re going to stop the presses and not drill up there.”

Tackett said the statements of Stallard and DePriest served to put EQT on notice that it must now take every step necessary to ensure that no public harm comes from the drilling operation.

“If they want to continue they do so at their own peril,” Tackett said. “Now they’ve got notice.”

Tackett said Jenkins, situated at the base of the Pine Mountain Fault, is “very unique geologically” and has seen little natural gas exploration — and the problems that may come with it — before now.

“If I looked at a gas well map I wouldn’t see many red dots in Jenkins and all of the sudden you’re drilling,” said Tackett. “Has there been some sort of find?” He then added, “To me, that newness creates some unknowns.”

EQT employee Roger Profitt said the recent boom in production is the result of the arrival of the proper “infrastructure to get the gas out of here.”

EQT is based in Pittsburgh, Pa., and is the largest natural gas producer in the Appalachian region. Rights to the natural gas on the Jenkins site was sold by Consolidation Coal Co. in 1922 to R.J. Graf, a gas and oil speculator who later sold his properties to Kentucky West Virginia Gas Company, which has since been absorbed by EQT.

“They can’t drill through your office,” Tackett said, citing an example to Mayor Dixon and others.

While the drilling will apparently continue for now, city officials and EQT representatives agreed that Nesbitt Engineering, a firm that provides services to both entities, would be researching what type of testing is available to help determine the safety dangers of drilling a natural gas well beside a water tank.

“We ought to have somebody look at it to design our tank to be failure proof,” Tackett said.

“The only safe thing to do is to quit drilling,” Stallard said.

EQT’s Royster apologized to Mayor Dixon and the city for the lack of proper notice that drilling would occur near the water tank.

“I do think it was a mistake and not intentional,” Royster said.

Told that EQT and others involved in siting the gas well were surprised to learn the water tank was located inside the Jenkins city limits, Tackett asked: “That big blue thing sitting there didn’t give them any indication?”