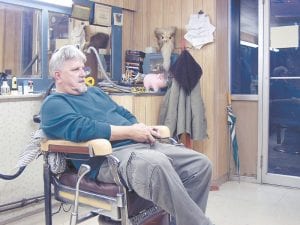 Barber Jerry Collins spoke with a visitor late last week at City Barber Shop. The shop located on Main Street in Whitesburg closed for good Saturday, ending its run of being one of the oldest businesses still in existence in Letcher County. Collins is now cutting hair at the former site of Roger’s Barbershop in Isom. (Photo by Ben Gish)

When Jerry Collins turned the key to lock the City Barber Shop for the final time on December 29, it offi cially marked the end of the oldest barber shop in Whitesburg and one of the oldest continuous businesses in Letcher County.

Collins, 63, said he isn’t retiring, but had to close the shop located in the basement of a Main Street building because the building’s owner wants the space for storage.

He started cutting hair this week in the former location of Roger’s Barbershop at Isom.

“I started working here the last three months of 1970, for Snake Frazier,” Collins said before the shop closed. “I’ve been here ever since.”

Collins said that when he graduated Lexington Barber College and returned to Whitesburg to work for Frazier, men’s haircuts cost $2 and children’s cuts were $1.75. He now charges $8 for a cut.

For the first couple of years Collins worked in Whitesburg, the Premium native manned the shop’s second chair while Frazier held down the first chair. 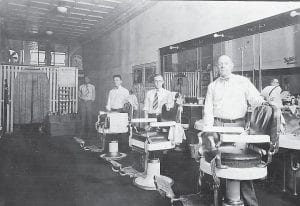 This photo was taken a year after the City Barber Shop opened in the Daniel Boone Hotel building on Main Street in Whitesburg in 1928. Owners were Milburn Polly, Herman Crase and Sam Blair. (Photo courtesy Raymond Lee Polly)

Frazier had purchased the shop from Siller Polly, widow of barber Milburn Polly, in 1967. Two years after Collins arrived, Frazier stopped cutting hair to begin a more lucrative job of weighing coal at a tipple.

A short time after Frazier left, Collins also went to work in the coal business, but returned after Frazier offered to sell him the business, which opened in a different location on Main Street in 1928.

Collins said he will miss being in downtown Whitesburg after working in the same location for 42 years.

“You get used to a place and it’s hard to leave it,” he said.

Collins said much has changed in downtown Whitesburg since he arrived, particularly the decline in morning and daily traffic — and shoppers — on Main Street.

He said the decline began when Walmart arrived at Ermine and caused the smaller stores which once occupied Main Street to go out of business. The problem was made worse, he said, when city officials allowed the post office to move out of downtown.

“I think the biggest thing is they let that post office get away,” Collins said. “The best thing they could have done was keep Walmart out of town and the post office in town.”

Collins said he expects to see an increase in customers at Isom, since he will be located across the street from a busy shopping center.

“I believe there are more people in and out of that shopping center than there are in downtown Whitesburg now.”

Collins said that Whitesburg doesn’t come alive now until bars and restaurants start to get busy late in the afternoon and nights.

“Everything has changed,” he said. “ The whole town has changed, Now it starts coming to life in the evenings.”

City Barber Shop opened in 1928 in a storefront adjacent to the old Daniel Boone Hotel (later occupied by the old Letcher Insurance Agency).

It was originally owned by Millard Polly, Sam Blair and Herman Crase.

According to Polly’s son, Raymond Lee Polly, Crase grew short on funds and sold his part of the shop to his father and Blair and moved to Louisville.

At the end of World War II, said the younger Polly, the shop moved from the hotel to the basement of the Western Auto building because the hotel’s owners raised the rent so high.

Blair, who opened his first barber shop in Jenkins in 1915, retired temporarily in December 1964, at which time he told The Mountain Eagle he had “worked up and down Main Street for 47 years.”

Blair returned to work at the City Barber Shop, but sold his share to Polly in 1967. On December 3 of that year, Polly died at 60 of a fatal heart attack.

“If this place could talk it could tell some Jim Dandy’s,” Collins said before closing the City Barber Shop for the final time.