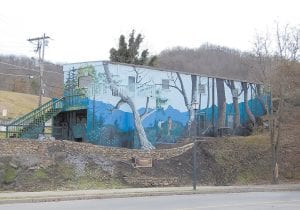 The mural entitled “Daniel Boone on the North Fork of the Kentucky River circa 1767” overlooks Main Street at the foot of Cowan Street (School Hill).

If you have driven through downtown Whitesburg in the last few months, chances are you have spotted frontiersman Daniel Boone looking out over Main Street.

The elaborate mural on the back of the old WIFX radio building at the foot of Cowan Street (School Hill) was painted by about 20 volunteers near the end of 2012. The building is owned by Mark Kidd and has been remodeled into four apartments. Kidd leased 2,100 square feet of vertical surfaces of the building to the Letcher County Tourism and Convention Commission for a dollar a year for 99 years.

“It’s a nice community gesture for him to do that,” said Dr. David Narramore, chairperson of Letcher County Tourism and Convention Commission.

The colorful mural, which was designed by Doug Adams, a Letcher County native and Kentucky Heritage Artist, is part of Whitesburg’s “streetscape plan.”

The life-sized rendition is titled “Daniel Boone Arriving on the North Fork of the Kentucky River, circa 1767.” 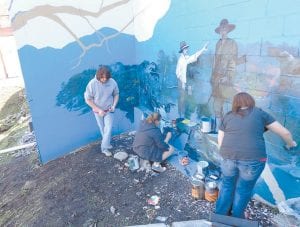 Students who study art under Doug Adams at Letcher County Central High School were photographed by Dr. David Narramore in September while painting on the mural overlooking Main Street.

“It has helped generate foot traffic to downtown,” said Narramore.

With a grant from the Brushy Fork Institute of Berea College, Adams was hired as consultant to teach people how to design and paint murals. Most of the paint, manufactured by PPG Porter, was donated by Frazier’s Farmer Supply. City of Whitesburg employees helped clear the area in front of the mural and Don Bentley of Neon laid the stone.

Adams wanted the mural designed in a way it could be both historical and educational.

“It shows the importance of this region,” said Adams. “A lot of people have very little knowledge about Daniel Boone’s settlers. Daniel Boone was trying to find an easy way to take settlers westward.”

Adams said Boone was trying to follow the Kentucky River to get to Boonesborough, but the terrain around the headwaters of the river’s North Fork was too rough. Adams said some people don’t realize the North Fork begins at Payne Gap in Letcher County. He wants people to become more curious about Daniel Boone and Kentucky history.

Adams said there is a misconception about Boone’s wearing of coonskin caps.

“A black hat was his trademark,” said Adams. “He didn’t wear coonskin caps.”

The mural is part of the first phase of the streetscape project. Besides minor projects like installing flowerboxes and hanging large paintings on a building downtown, the tourism commission is almost ready to begin phase two, Narramore said.

Phase two involves the design and construction of an amphitheatre at the Mountain Heritage Festival Village. A pavilion would extend from the main stage with restrooms.

Businesses which touch Broadway Street behind the Letcher County Courthouse will be encouraged to paint the backs of their buildings an off-white color and to install art on the back sides. Narramore said this is the first sight motorists see when entering downtown from the KY 15 bypass ramp near the East End of Main Street.

Narramore said a proposed roundabout is still in the plans. Officials with the Kentucky Transportation Cabinet have estimated that the roundabout project would cost $951,00 to design and complete. Narramore is waiting for it to be added to the six-year road plan.

The roundabout is designed to help fix a traffic problem near the old Hoover’s Department Store building, which is now Bella’s Home Furnishings.

In addition to traffic coming in several different directions, the entrance to the free city parking lot is also located at the intersection. It is now unclear which motorist has the right of way if a car is traveling down College Drive and another car is coming from the loop of the Whitesburg Bypass.

With the roundabout were completed, traffic would flow in one direction around the circle and motorists entering the circle must yield to cars already there.

The roundabout, a water feature and sculpture have been placed in phase three in addition to re-routing all overhead utilities to underground. The construction and re-routing of sidewalks is also in phase three.

Phase five calls for the relocation of all overhead utilities underground on Bentley Avenue and from East Main Street to Madison Avenue. New light poles would be placed on these streets. New benches, trashcans and street signs would also be placed downtown.

With funding from a mini grant provided by the Center for Rural Development, Summit Engineering created computerized renderings of what downtown Whitesburg could look like if all of the recommendations were applied.