CJ Frederick ready for what awaits him at UK

CJ Frederick insists he really does not have a big concern about transferring from Iowa to Kentucky.

Frederick, a former most outstanding player in the Kentucky boys’ Sweet 16, was not recruited by John Calipari after his standout career at Covington Catholic that ended with a state championship. He has spent the last three years at Iowa, where he was a 47 percent shooter from 3-point range.

“I’m kind of coming in learning everything, learning about the campus, meeting the guys, getting to summer school and all that stuff. Just a range. But I wouldn’t say concerned. Meeting the guys is definitely the first priority — that and creating relationships with them. But nothing I’m too concerned about,” Frederick said last week.

He did admit Kentucky was a dream school for him even though he was not initially recruited by the Cats.

“Being around the area, I kind of know what it means to play on this team. I never thought it would happen. I’m just super excited that it did happen. But I knew that I was going to go to a team that needed me,” Frederick said. 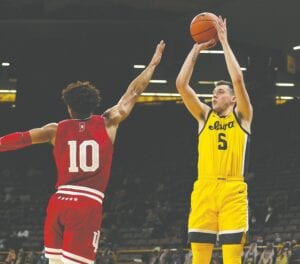 “Coach Cal was actually one of the first people to call me when I entered the portal. The minute I talked to him I could feel the genuine need for me to come in and help lead the team and help make shots and help spread the floor. That was something that I really liked and enjoyed talking with him about.” s

Despite his struggles with shooting the basketball in Sunday’s playoff opener against the Atlanta Hawks, former Kentucky star Julius Randle has had an MVP-like season for the New York Knicks, which went from 21-45 last season to 41-31 this year to earn the team’s first playoff berth since 2013 as the No. 4 seed in the Eastern Conference playoffs.

Tom Thibodeau is in his first season as New York’s head coach, but this is also the first season for assistant coach Kenny Payne, who coached Randle at UK along with Nerlens Noel, Kevin Knox and Immanuel Quickley — other former Cats playing for the Knicks.

New Indiana coach Mike Woodson, an assistant coach with the Knicks this season until he got the college job, told SNY TV’s Ian Begley that Payne deserves credit for Randle’s performance.

“I wouldn’t call it a surprise because he’s been a pretty solid player in the league. It wasn’t new to him. He’s put up some decent numbers (in past seasons),” Woodson said. “But I think his comfort zone is having Kenny around him. Kenny is a magician, man.

“Kenny has a way of getting in guys’ heads. I have no idea what he said to Julius but the fact that he coached Julius in college, he had a relationship (with him) and he worked with Julius, I think Julius bought in at a high level in terms of what Thibs was preaching. And whatever Kenny was selling, it’s been pretty damn good all across the board.”

If you thought getting both his mother and grandmother new Range Rovers for Mother’s Day made former UK basketball standout Immanuel Quickley special, guess what he did just a week later for his aunt, Demetria Caldwell. He got her a new Range Rover as well.

The New York Knicks rookie could count on his aunt being at just about every UK game he played during his two years at Kentucky. She had no idea his surprise gift was coming, either.

“We did a family Zoom call. I opened a gift Immanuel had mailed to my brother Shawn for me while Manny was on the Zoom. Then he said, ‘Aunt Mechie go outside. I was like me … no way!’” she said.

“The new shoes he just brought me I couldn’t even put on. I was in a happy state of disbelief. I finally got the other shoe on but forgot to put on the other sock. So, I literally had one sock on all day.”

When she got outside, she was shocked.

“I saw that perfect blue car with a big red bow on it! I felt 16 again with keys to my own car,” Caldwell said. “I literally drove my brother to his house, my dad to my parents’ house and picked up my friend to come over to my house. I even drove to the store to get some additional juice for the in-house seafood party.”

Caldwell has had as much fun watching the Knicks play this year as she did when her nephew was at UK — where he was SEC player of the year his sophomore season.

“We have had fun attending the Knicks games and following all protocols. So I’ve missed a few games here,” she said. “Never missed any UK home game that Immanuel played in. When I look back, I can’t even believe it. That 8.5-hour ride (from Maryland to Kentucky) felt easy and now the 2.5-hour ride to New York feels the same.”

Now it will seem even easier with a new Range Rover to use. s

“He is a winner. Whatever it takes for him to win, especially in big games, he will do it,” said Kaffey. “He will always show who he is. We were so good team-wise that there was not any need for him to do anything crazy when we were blowing a team out. But the bigger the stage, the better he always is.”

Kaffey said in most games Arizona Compass Prep had, Washington would usually be the best player on the court. However, that never influenced Washington’s work ethic.

“TyTy is a worker,” Kaffey said. “We told him if we wanted to be noticed, he had to get his body right. There would be days he would be outside at 5 a.m. pushing the sled. He got with our weight trainer and really improved his body.”

Kaffey said those who doubted Washington’s potential inspired him to show he was better than many believed.

“He’s been through a lot. There were some honors he should have been part of and wasn’t but that did not keep him from playing and working at a high level,” Kaffey said. “His parents did a tremendous job raising him. You are not going to outwork him.

“He had the mindset to show he was not the 115th ranked player in the nation and was not a low major player. For him to showcase what he could do, he needed to win. Part of winning is getting stops. He’s always had great defense in him but this year he was on a mission.”

Kaffey noted there was no “magical” transformation for Washington. Instead, he used the resources Arizona Prep provided to get his body right and hone his skills.

He led Arizona Compass to a 28-2 record and a spot in the Grind Session national championship game where it lost 51-49 to Monteverde Academy.

“The Grind Session was a great platform that helped him become the best player he could be. It’s a very competitive platform and he’s a very competitive kid, so he embraced the process,” Kaffey said. “He had a lot of plays that were just tremendous. He is flat addicted to winning. He found ways to be part of winning for us regularly. That’s why you can just describe him as a winner.”

“I have been doing this 14 years and know what guys are special. TyTy is a born killer,” Kaffey said. “He’s not going to smile. He’s going about his business. No stage is too big for him, either. He was born to be a professional basketball player and Kentucky will help his platform.

“They are used to excellence at point guard and TyTy is no different. I think he will come in and help the team get back to where Kentucky is used to being. He wants to be great and will be great. He’s built for that.” s

Quote of the Week: “A lot of my friends, so-called friends, abandoned me when I went to Greece. You know who texted me the most? John Calipari. Now we were not close friends, but John Calipari for the two years I was in Greece, always reached out to see how I was doing. That was never publicized, I never told anybody that, but it tells you a lot about him that people don’t know about,” Rick Pitino on the Rex Chapman Show podcast.