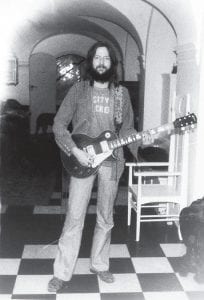 CLAPTON TAKES HONEST LOOK AT PAST – In this undated photo released by Random House, a youthful Eric Clapton poses with a Gibson, “Les Paul,” Guitar. In his autobiography, “Clapton,” he delivers a brutally honest and unsparing look at his life, near-death and recovery, interspersed with tales from an unparalleled music career. (AP Photo/Random House)

The second “o” is critical. Back in the 1960s, when London graffiti proclaimed “Clapton is God,” the brilliant British guitarist was descending into a personal hell. Eric Clapton traded a heroin addiction for alcoholism, suffered disastrous love affairs, contemplated suicide while armed with a bottle of vodka, a gram of blow and a shotgun.

The guitar deity has long since surrendered to a higher power; at 62, Clapton has 20 years of sobriety, a happy marriage and three young daughters. It’s a good time to consider an extraordinary life, as the rock Hall of Famer does with “Clapton: The Autobiography.”

Unlike many rock star efforts, this one includes no Zeppelinesque tales of debauched groupies or ghostwritten revisions of musical and personal history. Clapton delivers a brutally honest and unsparing look at his life, near-death and recovery, interspersed with tales from an unparalleled music career.

Clapton, sipping a bottle of water in an office at National Public Radio before doing a radio show, said he deliberately shied away from the usual type of celebrity memoir.

“I wouldn’t even know where to begin, to do that,” Clapton explains. “I don’t even know what that means, to be honest with you. Celebrity has lost whatever meaning it did have. I really tried to find out for myself where I’d been.”

Initially, Clapton planned to sit down for a series of interviews about his life, leaving a collaborator to handle the tweaking and organization. But a perusal of the first manuscript led the guitarist to get more hands-on.

“I realized this was not what I wanted to do at all,” Clapton says. “So I rewrote that, and then I thought, ‘I’ll have to write this myself.”‘

Clapton’s six-string inspiration, Robert Johnson, sang of a single hellhound on his trail; Clapton had a whole pack nipping at his heels until a second trip through rehab changed his life in 1987. Johnson was dead by age 27, and there was a time when Clapton was convinced his life wouldn’t last much beyond that.

“I entertained that notion when I was young and I was trying to identify with those guys,” Clapton says of Johnson and other legendary bluesmen. “That is kind of a built-in fantasy that goes along with addiction, a way of justifying my need to get stoned: ‘Well, that’s what my heroes did.”‘

Through it all, Clapton created an indelible musical legacy that spanned genres while inspiring generations. The autobiography’s chapter titles provide a roadmap through his life’s work:

“Derek and the Dominos.”

Clapton, from his early days with the John Mayall’s Bluesbreakers, quickly assumed a position in the center of the music universe. He hung out with the Beatles and the Rolling Stones, jammed with Muddy Waters and Duane Allman, influenced Stevie Ray Vaughan, Derek Trucks and untold thousands of other guitarists.

He confesses, without embarrassment, that he can’t remember all of what happened. “My memory of the late ’60s right through the early ’80s is severely hampered,” Clapton says. “I wrote from what I could remember, and I needed nudging, too.”

Clapton’s book is not totally devoid of tabloid-worthy material. He recounts how Mick Jagger once stole his girlfriend – an Italian model – setting off homicidal fantasies in the late 1980s.

“I went on a rampage, mentally,” Clapton recalls. “I wanted to kill him. I spent quite a long time plotting ways to undermine or just do away with (him) – the kind of mad fantasies a drunk in recovery can have.”

He also delves into his romance with Pattie Boyd, who wound up with Clapton after her split with Beatle George Harrison. Their star-crossed affair made her the muse for some of Clapton’s most memorable songs, including “Layla” and “Wonderful Tonight,” before the romance gave way to recriminations.

Clapton recalled a recent Sun- day morning trip to his local grocery store, where Boyd’s new memoir, “Wonderful Tonight,” was excerpted in the British press. The page one headline jumped out as he grabbed the paper: “ERIC CLAPTON’S DRINKING KILLED MY MARRIAGE.”

“The headline editor chose to castigate me quite strongly,” Clapton says with more than a touch of British understatement. “I’m in the local shop, and I’m thinking, ‘Are the neighbors watching me read?”‘

Clapton greets his guest alone, without an entourage or stylists or publicists. He wears glasses, and his hearing is failing. His hair is cut short, with a bristle of beard rising from his face. In a T-shirt and jeans, Clapton is unpretentious and open – reflective in one instant, laughing in the next.

In his writing, he referred to diaries that he’d kept during the ’80s. The musings, squirreled away in an attic for years, brought back painful memories. Clapton recalled that most of his writing came with a pen in one hand and a drink in the other.

“I was having delusions of grandeur,” he says with a selfdeprecating laugh. “I thought I had something worth saying. That’s what drink can do – give a deluded view of my selfimportance.

“So once I got fueled up on my amount of alcohol for the day, it would have been easy for me to devote of couple of hours writing down mad thoughts. These days, I don’t think I would give myself the time.”

These days, his time is otherwise occupied. Besides family life, Clapton remains involved with the Crossroads treatment center that he founded nearly a decade ago in Antigua – a huge benefit concert was held this past summer. And while he plans to cut back on live shows, Clapton has no plans for retirement.

“I can’t stop touring, and I won’t,” he says emphatically. “I believe I have a responsibility to play for people.”

Over the decades, Clapton has seen an assortment of friends and colleagues die, from Jimi Hendrix to George Harrison, from Duane Allman to Bob Marley, from Stevie Ray Vaughan to Muddy Waters. Asked how he managed to survive, Clapton has a ready answer.

“I’ve always assumed it was really because I hadn’t gotten my act together,” he replies, laughing loudly. “Maybe I’d better not get it too good, because then it will be time for me to check out.

“I’m glad it worked out that way. I still don’t feel like I’ve got it right. I’m still working on my sound.”

What? Eric Clapton is still working on hitting the right notes?

“Yeah,” he replies, his laugh filling the room. “Still trying to get the right amp.”