Clarence Halcomb is oldest at picnic 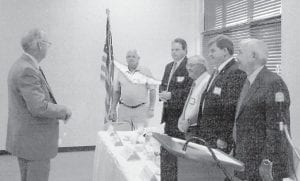 Are you enjoying the beginning of fall? As I look across the field from my house, the leaves are starting to show their beautiful hues of autumn colors. Charlie Waller’s song ‘God’s Coloring Book’ comes to mind.

I can almost hear the mountains calling to me saying, “Come home,” and feel the tug on my heart and my feet wanting to head that way.

I finally got the energy to start my regime of walking again. I haven’t done much of this in the last two weeks, just a little dab here and there.

It is very pleasant to walk in the morning, though I am damp with sweat by the time the two miles have ended, and then of course I start to chill. A breath of air can make me cold.

I am just not ready for fall because as I have been saying, it seems like forever. I dread winter, and it seems so long until spring.

I have to be honest, I am very ready for a new year just as long as it doesn’t bring the heartaches that this year has brought me and lots of others as well.

I want to return to the mountains yet my heart isn’t in it. I know that my sister-in-law Wanda Hall will make me as welcome as ever, it is just knowing my brother Ritchie is gone, to never return.

I have faced some things and felt a loss, but for some reason this has absolutely torn my heart from me.

Could be that I have just been handed too many things at one time?

A loss of any kind is hard to deal with. Death is just so final, yet I have always believed death is a part of life. As sure as we are born we are meant to die!

It doesn’t make it any easier for me to accept, even when I tell myself other people have suffered more than me.

Now on to much more pleasant things. As I was driving home I noticed some very unusual things. There’s an apple tree that has blooms on it, then there are a few crepe myrtles that are sprouting new blooms also.

It seemed like this year the mimosa trees showed their beauty longer as if to say, “Enjoy me because I will soon be gone.”

Even my Shasta daisies, along with my butterfly bush were in bloom until a few days ago, plus the iris my son Keith planted for me is blooming. Some roses will stay in bloom until snow.

A year has so quickly come and gone, as once more the Letcher County picnic is just a memory. As always, a pleasant one. The weather for this special event was absolutely fantastic. I wish I could take credit for such a perfect day.

There are things I planned I didn’t do. I wanted to have a birthday cake and cards to acknowledge three people who celebrate birthdays close together.

Oct. 8, Clarence Halcomb will be 94 years young. Clarence should have been given a prize for the oldest person who attended.

Berma should have received a prize for coming the farthest, which is approximately 250 miles.

Berma is a friend beyond what the word friend stands for. She goes to Waynesville to spend time with her brother Olan Whitaker, then the two of them came to Letcher County picnic on Saturday.

Clarence and Arlyn Halcomb have only missed the picnic a couple of times. The two of them were active in Governor Bebb’s fall events in which Clarence demonstrated the art of grinding corn on a small gristmill that he had made, something that is very seldom seen nowadays. I always enjoyed going to the festivities to be with Clarence and Arlyn.

Clarence and Arlyn also held open house to family and friends for a Christmas event. I am proud to say I was included in this event.

This was the first time for a few. Gary brought his mother Glenora, who is a sister to Bob Bryant. Her husband wanted to come, but he isn’t able to sit very long. He could have kept me company as I wasn’t still very long at a time.

This was a first for Susan Pepper and Amy Clay who are musicians, and couldn’t stay very long as they had a gig to play in Cincinnati. Gary, Susan and Amy did a short but great set of music.

Bob Bryant hadn’t played the guitar for two years. As I watched him pick up Gary’s guitar and start to play it while Gary accompanied him on the mandolin, I had to walk away and look across the field.

The love between the uncle and his nephew is very evident. Bob’s hands bother him so he has given up picking the guitar.

Bob told me years ago he taught Gary to play music, and I know Bob has been very influential in Gary’s love of music.

I really don’t know Gary that well except through the band RR#2, and Bob introduced us about 12 years ago.

Glenora is someone you feel you have known a lifetime, and such a delightful lady to meet. She also has a little bit of mischief in her just like me.

Susan and Amy both have so much talent and play a lot of venues. Amy wants to know when they come back next year, can they be honorary Letcher Countians? I told them it would be an honor for me to consider them from Letcher County

I knew Ken Frazier as a child, when Ken said he lived on one hill and I lived on the other. I started to tell him it was a good thing that a river, railroad tracks, and two roads separated us, as I couldn’t throw a rock that far.

Ken is a year older than me, and his dad Kingdon Frazier was a schoolteacher. I thought his mother Rachel Frazier was so pretty. Ken has an older brother Charles, and a younger brother Steve who I believe lives in Florida. Ken is a retired schoolteacher and lives in Milford.

This is the second time I have seen Ken Frazier since I was 12 or 13 years old and left Roxana.

As I sat there in the small crowd my thoughts reflected things that have transpired down through the years, of how many knew my parents when they were young, and a few knew my greatgrandparents William and Nancy Coots, and now they are stuck with me.

Johnny and Ann Calihan have watched my kids grow up and know my grandchildren and have seen my great-grandchildren, and still love me.

Bill Ison and Hayward Day both knew Dad (Clayton Hall) when they were young, and both Bill and Hayward probably wish I would move to Timbuktu, but they would miss me.

Carl Crase’s grandparents were from Roxana, Riley and Sally Crase. Carl’s family moved to Indiana when he was a child, and still Carl loves the mountains of Letcher County. Actually Carl got to make the trip back there about a year ago. I haven’t talked to Carl personally for a long time, but I overheard a little of his conversation to someone else .

Gary Eldridge’s dad is from Bull Creek, and his mom Glenora and Bob Bryant are from Hot Spot, which used to be called Elsie Coal, and now is called Premium.

Gary was raised in Indiana. He was born in the wrong place and era of time.

This was the first time for Jim Collins, and I hope he will come back again.

Shirley Godbey and Alphine Stacy are from Liberty. Alphine’s daughter Wilma Jean Casey is from Oklahoma. Alphine is my partner in crime, except this is called dancing!

Although this is not an event where hundreds of people come, we all have a good time, with plenty of food.

I hope next year to be a little more organized with some games, maybe we can play Red Rover, or build a Jump Board or play Hop Scotch, Hide and Seek or Antie Over.

Okay quit your laughing. I was going to get my daughter Kay Gray’s cornhole game, but it seems it disappeared.

Gracie Cornett, something is bothering me, don’t you have a birthday Oct. 7?

If I am not very badly mistaken Richie and Wanda’s little grandson Blayke Bates, son of Donald and Tina Bates, has a birthday Oct. 3. Richie would call to remind me.

If I am wrong about these dates, please forgive me.

I owe an apology to Alberta Bailey. Thank you so much for coming to see me, and it was a pleasure to see you again since I haven’t seen you in over 50 years.

I haven’t talked to Gwen Huff Farmer this week except for a very brief few minutes.

Shirley Wells, thank you from the bottom of my heart for your concern.

Thanks for everyone who made Letcher County picnic a success. If God is willing, I will meet you all again the last weekend of September next year, and no excuses.

Someone asked me what kind of good food was brought, but I am sorry to say I really don’t know. I only ate a couple of bites of chicken, a few bits of pumpkin pie, and a nibble of Ann Calihan’s apple dessert.

I took a sip of Coke and sat it down and forgot to drink it.

Doyle and Betty Ison were all set to head to the get-together and Betty woke up sick. Thelma Halcomb and her daughter Lavonne Brooks and son Ben weren’t able to be here because of illness.

Green Calihan gets a whipping with a hickory switch when I see him as he decided to go to an event at Lawrenceburg, Ind., or so I was told.

A few more said they were coming however they must have gotten lost like my friends Alphine and Shirley.

I better get this on its way as I am running late as usual.