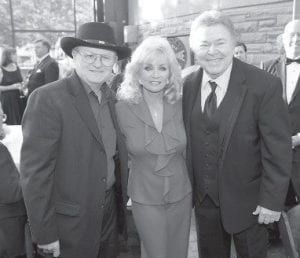 Country music stars (from left) Charlie McCoy, Barbara Mandrell and Roy Clark posed before being inducted into the Country Music Hall of Fame in Nashville on Sunday. (AP Photo)

Barbara Mandrell, Roy Clark and Charlie McCoy were inducted into the Country Music Hall of Fame this week in an at times emotional ceremony that saluted them for their music as well as their contributions to bringing the genre to a mass audience through television.

All three inductees “looked at the way country music was presented on television and said: ‘We can make this even better. We can present country music to a mainstream audience with respect, love and humor,” said Tammy Genovese, the Country Music Association’s chief executive officer.

Clark co-hosted the TV show “Hee Haw” with Buck Owens for more than two decades. Mandrell joined sisters Louise and Irlene to host “Barbara Mandrell and the Mandrell Sisters” on NBC in 1980. McCoy, an ace session musician, served as musical director of “Hee Haw” for 18 years.

Mandrell, 60, gave special thanks to her late father and longtime manager, Irby Mandrell, who died in March at age 84. She said she was grateful her father lived to hear of her pending induction.

“Irby Mandrell was my manager as well as being my Daddy over my 38-year career. He taught me and guided me and directed me. It is his name, Mandrell, that I am blessed to have, and it’s the gracious loving public and the fans that made that name known and made it become popular,” she said in her emotional speech. “So tonight I thank you with my entire being for putting my and my Daddy’s name into the Hall of Fame.”

The three were honored in a tribute Sunday that included performances by Garth Brooks, Reba McEntire, George Jones, Alison Krauss, Josh Turner, Michael McDonald, Rodney Crowell and others. With the inductions, the Hall of Fame now has 108 members.

Mandrell began her professional career in California when she was 11. She made her national TV debut on ABC with Red Foley’s “Five Star Jubilee.” Her first concert tour was with Johnny and June Carter Cash, Patsy Cline and Jones.

She charted her first single in 1969, a remake of Otis Redding’s “I’ve Been Loving You Too Long,” and went on to have a long run of country hits including “Midnight Oil,” ”Married But Not to Each Other,” ”Sleeping Single in a Double Bed” and “I Was Country When Country Wasn’t Cool.”

At the height of her career, she acted in TV shows like the “The Rockford Files” and in 1980 joined her sisters to host their show that drew 40 million viewers a week and broadened her exposure beyond country music.

“I adore you with all my heart. You are my other big sister,” McEntire told Mandrell. “I thank you for the things you taught me, not only musically but spiritually.

“And before I start balling like a baby, I’ll start singing,” McEntire said as she began “I Was Country When Country Wasn’t Cool” with Jones.

Evident of Mandrell’s diverse catalog, bluegrass great Krauss sang “The Midnight Oil,” and McDonald gave a bluesy take on “(If Loving You Is Wrong) I Don’t Want to Be Right,” originally a soul song that Mandrell made into a No. 1 country hit. Her sister Louise sang “Sleeping Single in a Double Bed.”

For Clark, guitarist Duane Eddy picked a rumbling rendition of the instrumental “Ghost Riders in the Sky,” one of Clark’s signature tunes. Josh Turner performed “Thank God and Greyhound.” Brooks, who, like Clark, is from Oklahoma, said Clark inspired him to pursue his dream and described the entertainer as “a man who never stopped being a man from where he was from.”

The 76-year-old humorist, singer and musician got his start on Jimmy Dean’s TV show “Town and Country Time” and took over the show when Dean left. He moved to Las Vegas in 1960 and became a regular at the Golden Nugget. Later, he toured and recorded with Wanda Jackson and was a regular at the Frontier Hotel in Vegas.

In the ’60s he had top 10 hits with “Tips of My Fingers” and “Yesterday When I Was Young.” He also broke into TV, appearing on “The Tonight Show” and “The Jackie Gleason Show” and playing recurring characters on the “Beverly Hillbillies.”

But Clark’s biggest break came when CBS developed a country version of the comedy series “Laugh-In” and picked him and Owens to co-host beginning in 1969.

“Hee Haw?” “At the dawning of the Age of Aquarius, a show called Hee Haw?” Young joked.

But the show ran for 25 years and helped make Clark and Owens two of the most recognizable figures in country music.

“We love you Roy Clark. We love you,” Grand Ole Opry star “Little” Jimmy Dickens told Clark as he formally inducted him into the hall. “Everytime you hit the stage you update country music 10 years, and that’s what it’s all about.”

An emotional Clark said it was humbling to be mentioned alongside many of his musical heroes.

“Just to be associated yourself with the members of the Country Music Hall of Fame and imagine that your name will be said right along with all the list … ,” he said.

True to form, Clark entertained with a couple of humorous stories and a song, “Yesterday When I Was Young.”

“Well, I never really cared for harmonica or harmonica players until I heard Charlie McCoy,” said Harold Bradley, a veteran session guitarist who formally inducted McCoy. “Charlie has taken harmonica playing to a whole different level. It’s not just his great technique, it’s his interpretation of many musical styles, from bluegrass, country and rock ‘n’ roll to a Hugo Montenegro album with strings and French horns.”

McCoy, who continues to record and perform, said when he first arrived in town he wanted to be a singer and didn’t know what a “session” was. But he learned fast watching a teenage Brenda Lee record “Sweet Nothin’s” with Nashville’s top studio musicians, known as the “A Team.”

“When I watched those Nashville A Team musicians work I said ‘To heck with singing, I wa