Classic car parade on base 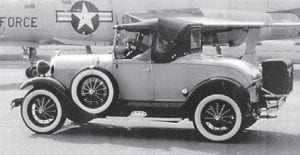 Everett Vanover drives his 1929 Ford in a parade at Travis Air Force Base in California.

One weekend early in 1960, I was at the base commissary on Travis Air Force Base in California, doing my shopping. When I came out to the parking lot, there were 20 classic cars from the State Classic Car Club parked near my car.

These folks wanted me to lead them in a parade around the base, and I did as they asked.

The base newspaper took photos and ran a story on the parade. When the story came out in a couple of days, my car was the only one seen up close.

The car club got in touch with me, thinking that I, as a printer, had something to do with the story.

I had the best looking car on base for many years.