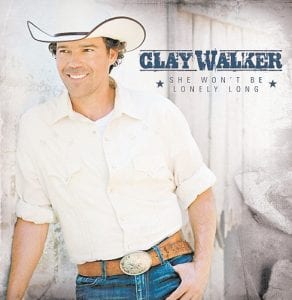 Clay Walker’s “She Won’t Be Lonely Long,” is shown.

A country music journeyman, Clay Walker never achieved the superstar status predicted for him when he launched his career with five No. 1 hits between 1993 and 1995. However, unlike most midlevel stars from the ‘90s, Walker keeps coming back, thanks to savvy song selection and a friendly, romantic style that fits well with country radio.

With the title song of his new album, “She Won’t Be Lonely Long,” Walker again reaches the top 10, this time with a spirited look at a spurned woman determined to find a better man. If the song has the laid-back, steel-guitar lope of an old-school ‘90s hit, well, that only makes Walker’s return more welcome.

Working with veteran producer Keith Stegall (Alan Jackson, Zac Brown Band), Walker maintains his usual consistency on most of “She Won’t Be Lonely Long.” The Texan is at his best when discussing love and its complications, especially on catchy, midtempo songs “Like We Never Said Goodbye” and “Wrong Enough To Know” (one of four new songs co-written by Walker).

Walker only stumbles when he takes chances, as in jittery, electronic-tinged “People In Planes,” in which Walker tries on a contemporary pop sound and finds it doesn’t fit. How- ever, as long as he stays in his comfort zone, his latest album shows why Walker continues to deserve his place in modern country music.

CHECK OUT THIS TRACK:
“Keep Me From Loving You,” with its subtly dramatic arrangement, allows Walker to show off his expressive voice with a believable portrayal of faithful love.