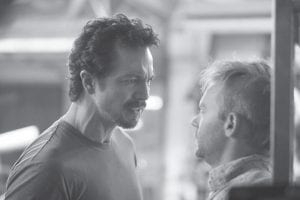 Benjamin Bratt (left) stars as William Banks and Esteban Powell stars as Arnie Swenton in the A&E Original Series “The Cleaner,” which premiered July 15. The program is now airing on Tuesdays at 10 p.m. (AP Photo/A&E Network)

Actor Benjamin Bratt remembers first hearing the concept for “The Cleaner.” It grabbed him, “however unbelievable I found it to be.”

Months later, he read the pilot script and saw the possibilities in this new A&E drama series. He liked how it’s part serialized portrait, part procedural. As for a heroin-addict hero whose last-ditch bid for recovery calls for him to help other addicts get clean, well, this “extreme interventionism” still had Bratt scratching his head.

“In my first meeting with the co-creators, Jonathan Prince and Robert Munic, I asked them, ‘How do you think audiences are gonna take to the idea? It seems a little outside the realm of possibility.’

As William Banks (the character Boyd inspired), Bratt leads an ill-assorted trio of other former users, a sort of A-Team (as in “addicts”) who’ll do almost anything, even at their own risk, to save their addict-in-need.

On the home front, Banks is a veteran of jail terms and rehab who loves his wife and two kids but neglects them. He sees his mission as “the cleaner” as a pact made with God, a sacred calling that comes before everything. Maybe he has traded one addiction for another.

“A case is opened and closed each week,” says Bratt, whose show premiered Tuesday. “But that’s not the whole thrust. It’s balanced by this idiosyncratic, complex character: As good as William Banks wants to be – and is, in his chosen profession – he’s far less effective as a husband and father.

“That’s what excites me the most, playing that home stuff!”

In recent years, Bratt, 44, has been seen in a variety of films including “Traffic,” “Love in the Time of Cholera,” “Miss Congeniality” and as the poet-playwright Miguel Pinero in “Pinero,” which he calls his “proudest piece of work.” (It’s also how he met Talisa Soto, a co-star of the 2001 film and his wife of six years.)

In 2005 he starred in the identity muddled NBC drama “ERing” (which, in its few episodes, drifted from a Pentagon version of “The West Wing” to a globe-trotting thriller). Earlier this season he headlined A&E’s miniseries remake of “The Andromeda Strain.”

“Audiences really like procedurals, but they often exist to the detriment of any personal life for the characters,” Bratt observes. “That’s fine for viewers. But, after awhile, it wasn’t fine for me as an actor, as much as I loved that show and the people I was working with.”

He left in 1999 after four seasons busting crime alongside the late Jerry Orbach as Detective Lennie Briscoe (warmly remembered by Bratt as “a magician in a lot of different senses of the word, a magical sort of guy”).

A decade later, Bratt finds he’s still a fan of the show, despite having once been part of it.

“I’ve been to Oz and pulled the curtain back,” he says with a chuckle. “I know what the ‘Law & Order’ machinations are. It doesn’t matter. Even today, if I’m running through channels and I stumble on that intro teaser, I have to sit down and watch. It’s just that good.” He marvels at its 18-and-counting seasons. “There’s never been a show like it.”

Recently, Bratt wrapped his latest film, in which he plays a Latino working man who learns that the teenage son he adores is gay. “Mission Street Rhapsody” was written and directed by Peter Bratt, and shot in the Latin neighborhood of San Francisco’s Mission District. It clearly was a passion project for both of them.

“I’m lucky to have my brother – an incredible talent and my best friend,” says Bratt. “I’ll always make films with him.”

With “Rhapsody” in postproduction, Bratt is busy on “The Cleaner” – and pleased to have a steady gig in Los Angeles, where he and Soto live with 5-year-old daughter Sophia and 2-year-old son Mateo.

“Unless I’m home, I cannot be a great husband and father – especially the father of a child with special needs,” says Bratt, explaining that Sophia suffered brain injury at birth, resulting in physical disabilities.

“What my wife and I faced as parents was like being in a tunnel of darkness for the first few years of her life, because we didn’t know what to do,” he says. “But we educated ourselves, and assembled the best team of therapists we could. Sophia has blown us away with the amount of progress that she’s made.”

“She understands everything, she’s quick to laugh, she’s loving and a physically beautiful child,” he says. “And even at 2, Mateo encourages her, pushes her along. She clearly doesn’t want to be left behind. Now she’s about to start kindergarten. It makes us fearful and excited at the same time.”

His devotion to his family has served him well on “The Cleaner,” where strangers’ lives are saved but Banks’ own family could be lost to him. “It allows me,” says Bratt, “to understand what the character I play is going through.”