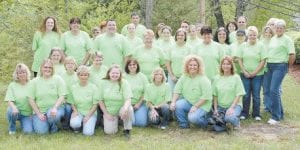 Groups of employees from Childers Oil Company were among those participating in last month’s annual PRIDE Spring Cleanup in southern and eastern Kentucky. More than 200 volunteers from the company’s stores throughout the region filled 1,341 bags with trash, covering 36 miles of roadway in Letcher, Floyd, Knott, Perry and Pike counties.

Not only did the work done by the 208 employees help clean up the region, it also paid off for three food pantries in Letcher County, where Childers cleaned up 10 miles. Childers matched a county government donation of $100 per mile cleaned up, resulting in a total of $2,000 that will be split among Three Forks Ministries, ECCO and the Letcher County Food Pantry.

“Our managers and other volunteers got really excited about the cleanup,” said Childers owner/operator Missy Matthews. “They all said it’s a great feeling to do something good for the community.” That enthusiasm was evident in the fact the total number of bags of garbage collected was about three times as many as they had picked up in previous PRIDE cleanups.

Besides the usual paper, cans and fast food wrappers, Matthews said the Childers crew picked up a few larger items, including tires, mufflers, toilet seats and even a car hood.

“Our folks had a lot of fun,” Matthews said. “They can’t wait for the next time.”

PRIDE, which stands for Personal Responsibility In a Desirable Environment, was started in 1997 by U.S. Congressman Harold “Hal” Rogers.