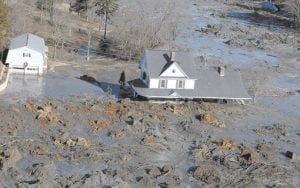 The Tennessee Valley Authority is working to contain the release of potentially toxic pollutants from the coal-fired Kingston power plant after a breach in an earthen dike released 2.6 million cubic yards of ash-laden sludge from a holding pond.

A surface layer of ash was slowly moving down the Emory River from the plant near Harriman, about 50 miles west of Knoxville. TVA hoped to trap it with a temporary dike on the Emory River and a boom farther downstream on the Tennessee River. The plant is known for its tall towers seen along Interstate 40 near the Harriman exit in Roane County.

“It is possible it is going to have some metals in there,” said Laura Niles, regional spokeswoman for the EPA in Atlanta. Those could include mercury and arsenic.

WBIR-TV reported hundreds of dead shad floating downstream of the plant, but TVA spokesman Gil Francis said the fish kill may have resulted from freezing cold thought to have contributed to the ash pond break that happened around 1 a.m. Monday, not pollutants.

Kilgore said six inches of rain in 10 days also may have contributed to the rupture, estimating that much rainfall would have added about 100 million pounds on top of the 40-acre lagoon that broke.

The lagoon was one of a series of holding areas where ash generated by the plant was dried until it could be buried or recycled for road beds and concrete. The ash piles at times reached 55 feet above the water.

The cause of the breach remained under investigation. Kilgore said leaks were repaired in the retention pond walls in 2003 and 2006, and maintenance problems identified in the pond’s last annual review in January were fixed.

About a dozen houses were damaged when a wall of water, ash and mud crashed into scattered residences near the plant — a massive nine-boiler power station that burns 14,000 tons of coal a day and can supply enough electricity to serve 670,000 homes.

Kilgore said three homes were effectively destroyed and TVA would provide those families with longterm housing and other assistance. A new water line was being installed for others in the neighborhood. They were advised to boil drinking water until it was completed.

The ash-laden muck covered up to 400 acres and left a scene of devastation that “looks rather like a moonscape,” Kilgore said.

Environmentalists raised concerns. One calculated the toxic coal sludge could have filled 798 Olympic size swimming pools. “The holiday disaster shows that there really isn’t such a thing as a clean coal plant,” said Chandra Taylor, staff attorney for the Southern Environmental Law Center.

Lisa Evans, a Massachusetts attorney for the environmental group Earthjustice, said there have been similar spills in Pennsylvannia and Georgia. She blamed the industry and lack of federal regulation.

“The saddest thing is this is entirely avoidable,” Evans said. “These people in these communities don’t have to be in harm’s way. This is not some complicated problem like nuclear waste. This is something the utilities know how to do.”