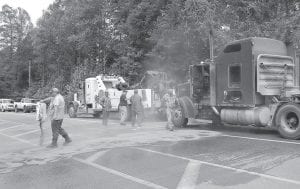 Ken Sexton Jr. poured a bag of oil absorbent on the Whitesburg bypass near the turnoff to Letcher Manor Nursing Home on Sept. 17 after an semi-tractor trailer truck caught fire. Letcher County Sheriff’s Deputy Michael Burton said he was patrolling when he noticed smoke coming from an 18-wheel truck driving in front of him. “When he hit the bridge there was so much smoke you couldn’t see,” said Burton. “Next thing I knew it went kaboom.” Burton said flames as high as 20 feet shot out of the front of the truck. Burton said he quickly notified officials and members of Whitesburg Fire Department responded to the scene within five minutes. Mark Sexton, captain of the Whitesburg Fire Department, said the fire, confined to the front of the truck, was quickly extinguished. Sexton said the fire was most likely caused by mechanical failure. (Photo by Sally Barto)