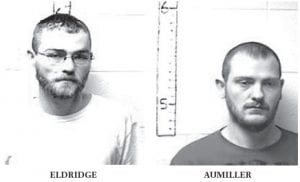 Police say a Fleming-Neon convenience store clerk helped her boyfriend and another man rob the store two weeks ago.

Carly Austin, a clerk at the Double Kwik Marathon, took $1,452 in cash from the register around 9:25 p.m. on Oct. 24 and gave the money to her boyfriend, Michael James Aumiller, 25, of Seco, said Fleming-Neon Police Captain Tim Miller.

Austin, who has since been admitted to a psychiatric center in Hazard for observation, had originally told police that the robber had a large knife, disguised his voice and demanded money.

Miller said Austin’s story didn’t add up and that she had about five times as much money in her register than she normally should have had.

Once Austin is released from the psychiatric center, she will be charged with complicity to firstdegree robbery.

Phillip Eldridge, 26, of 248 Ran Day Hollow, Cowan, was arrested and charged with complicity to first-degree robbery. Miller said Eldridge assisted Aumiller and Austin with the robbery by driving the drop-off and getaway car after learning of the criminal plan involving Austin from Aumiller. Eldridge accepted some of the stolen cash, according to court documents.

During the course of the getaway, Eldridge was threatened by Aumiller that he would cut Eldridge’s throat if he ever told anyone about the crime, according to an arrest warrant electronically signed by Letcher District Judge Kevin R. Mullins.

Aumiller had been living with Eldridge at his Cowan residence, Miller said.

Aumiller and Eldridge were both arrested Nov. 3. Aumiller has been charged with first-degree robbery.

On the night of the robbery, a man dressed in black walked into the convenience store and turned the lights out. The man’s face was covered, said Miller, adding that a floodlight that was on in the back of the store kept it from being pitch dark. Miller said the robber wasn’t in the store more than a couple of minutes before he fled the scene with cash.

Aumiller was served with two additional warrants. He was charged with intimidating a participant in the legal process by allegedly threatening to cut Eldridge’s throat if he ever told about the robbery plan.

In a third warrant, he was charged with two counts of theft by unlawful taking or distributing (firearm). Sometime between Jan. 26 and Feb. 26, 2012, Aumiller, along with Alexis Bentley, took Pamela Aumiller’s 30-30 rifle from her home, according to court documents. Aumiller, along with Bentley and Joe Maggard, took Pamela Aumiller’s .22 long rifle from her home and went with Maggard when he sold the gun to Robert Sword, who admitted he purchased the gun and sold it to James Hall, according to a warrant.

Preliminary hearings for Aumiller and Eldridge will be held later this week in Letcher District Court.