What would make my antifreeze disappear 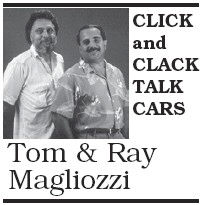 I have a 2001 Chrysler Town & Country with a 3.3-liter V-6 engine and 134,000 miles on it. I use it to deliver mail for the U.S. Postal Service. One day I refilled my antifreeze, and a week later, it was empty. This past week I put in two gallons and now it’s empty again. There’s nothing on my driveway, so the car’s not leaking. So, where is all of that antifreeze going? Please help. – James

TOM: It’s going air mail, James. It’s getting burned up in your engine and sent, first class, out the tailpipe.

RAY: There’s a small possibility that it IS leaking, even though there’s nothing in your driveway. Sometimes a leaky water pump, for instance, will drip only when the engine is running. In that case, you’ve been leaving a few drops at every mailbox every day.

TOM: Actually, it’s unlikely that you’d leak out two gallons in a week without seeing anything. But check for a puddle in your driveway after the engine’s been idling there for half an hour or so, just to be sure.

RAY: If you don’t see any evidence of an external leak, then the coolant is leaking inside the engine. If you get someone else to drive the car, and you drive behind it, you’ll probably see voluminous clouds of white smoke coming out of the tailpipe. Or, if you check your oil dipstick, you may find it overfilled and frothy. That means coolant’s mixing with your oil.

TOM: In that case, the bestcase scenario is that you have a blown head gasket. But if you wait too long, it could get worse. If you run out of or too low on coolant, you could overheat the engine and end up with a cracked block or a cracked head. My brother has a cracked head.

RAY: Right. But no one’s counting on me to deliver the mail. So I can just live with it.

TOM: This is something you want to get checked out soon, while there’s still hope of saving the engine, James. And if you need a new engine, maybe you can get a deal on having one mailed to you!

Stop the madness! You can stop driving like a knucklehead, and you’ll help your car in the process. Learn how your driving habits can harm your car in Tom and Ray’s pamphlet “Ten Ways You May Be Ruining Your Car Without Even Knowing It!” Send $4.75 (check or money order) to Ruin, P.O. Box 536475, Orlando, FL32853-6475.