BY TOM AND RAY MAGLIOZZI 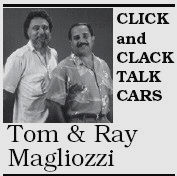 I have a 2002 GMC Envoy that just passed 100,000 miles. I have always been pretty conscientious about scheduled and preventative maintenance. The owner’s manual recommends changing the transmission and filter at 100,000 miles. I have read and heard advice that if the filter or fluid has not been changed before 50,000 miles, you should not change it, due to varnish and film that would then be released into the new fluid. I don’t see any sense in calling the dealer, as they obviously will advise me to change it. I would like a “nonprofit” answer from someone I trust, which is you two car guys. – Jim

RAY: This is an old myth that we’ve heard many times – and probably passed along ourselves, on occasion.

TOM: It goes something like this: When your transmission is really old, the gums and varnishes that have built up over the years are actually holding the transmission together now. And if you change the fluid and drain out all that gunk, the transmission will fall apart.

RAY: But I’ve got news for you. If varnish is all that’s holding your transmission together, there’s a rebuild in your near future anyway.

TOM: So if your owner’s manual calls for a transmission service at 100,000 miles, do it, Jim. In fact, if you plan to keep your car until the bitter end, you can even change it more often than that – say, every 50,000 miles. And if you feel pain in your chest or shoulder that radiates down your arm, don’t be afraid to go to the hospital.