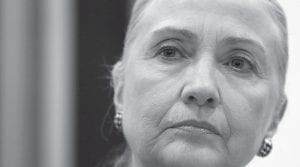 Secretary of State Hillary Rodham Clinton was admitted to a New York hospital after the discovery of a blood clot stemming from the concussion she sustained recently. (AP Photo)

The kind of blood clot in the skull that doctors say Hillary Rodham Clinton has is relatively uncommon but can occur after an injury like the fall and concussion the secretary of state was diagnosed with in December.

Doctors said this week that an MRI scan revealed a clot in a vein in the space between the brain and the skull behind Clinton’s right ear . e

Th clot did not lead to a stroke or neurological damage and is being treated with blood thinners, and she will be released once the proper dose is worked out, her doctors said in a statement.

Clinton was admitted to New York-Presbyterian Hospital on Sunday, when the clot was diagnosed during what the doctors called a routine follow-up exam. At the time, her spokesman would not say where the clot was located, leading to speculation it was another leg clot like the one she suffered behind her right knee in 1998.

Clinton had been diagnosed with a concussion Dec. 13 after a fall in her home that was blamed on a stomach virus that left her weak and dehydrated.

The type of clot she developed, a sinus venous thrombosis, “certainly isn’t the most common thing to happen after a concussion” and is one of the few types of blood clots in the skull or head that are treated with blood thinners, said neurologist Dr. Larry Goldstein. He is director of Duke University’s stroke center and has no role in Clinton’s care or personal knowledge of it.

The area where Clinton’s clot developed is “a drainage channel, the equivalent of a big vein inside the skull — it’s how the blood gets back to the heart,” Goldstein explained.

It should have no longterm consequences if her doctors are saying she has suffered no neurological damage from it, he said.

Dr. Joseph Broderick, chairman of neurology at the University of Cincinnati College of Medicine, also called Clinton’s problem “relatively uncommon” after a concussion.

He and Goldstein said the problem often is overdiagnosed. They said scans often show these large “draining pipes” on either side of the head are different sizes, which can mean blood has pooled or can be merely an anatomical difference.

“I’m sure she’s got the best doctors in the world looking at her,” and if they are saying she has no neurological damage, “I would think it would be a pretty optimistic long-term outcome,” Broderick said.

A review article in the New England Journal of Medicine in 2005 describes the condition, which more often occurs in newborns or young people but can occur after a head injury. With modern treatment, more than 80 percent have a good neurologic outcome, the report says.

In the statement, Clinton’s doctors said she “is making excellent progress and we are confident she will make a full recovery. She is in good spirits, engaging with her doctors, her family, and her staff.”