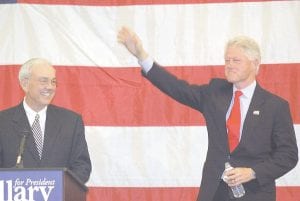 Clinton told more than 3,000 people who showed up to hear him speak that his wife, Democratic presidential hopeful Hillary Clinton, would make the country energy independent with clean forms of energy that will create jobs.

“This is the only strategy that will bring jobs to every state, to every rural area, to every small town, to every suburb and to every city,” he said.

He told the audience at the East Kentucky Exposition Center that the New York senator would also focus on clean-coal technology if she’s elected president, the Appalachian News-Express reported.

“Yes, we do need to figure out how to produce clean coal if we want to turn this country around and do it in a way that preserves the environment of America and the world,” he said during the April 4 visit.

Speaking for more than an hour, Clinton covered topics ranging from the economy to the war in Iraq, saying his wife would bring home one or two brigades a month as long as American civilians or people who have cooperated with the U.S. wouldn’t be in danger. She would also leave special forces in northern Iraq to deal with al-Qaeda, he said.

Kentucky has come into play in the tight Democratic race between Clinton and Sen. Barack Obama, although the state’s primary isn’t until May 20.

Patton said that during the Clinton administration, Bill Clinton visited Kentucky eight times, more than any other president.