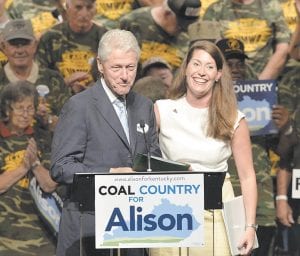 While sharing the stage in Hazard last week with former President Bill Clinton and United Mine Workers, Alison Lundergan Grimes declared that she is a Clinton Democrat and the true pro-coal candidate in the race for United States senator.

“I am the Kentucky candidate who will forge relationships and bipartisan alliances to make sure we restore coal to its rightful place as a prime American export and having a fundamental place in our national energy policy,” Grimes said while addressing a standing room only crowd at The Forum at the Hal Rogers Center on August 6.

Grimes said she will fight for coal miners’ benefits “that they are due and deserve.”

“In 30 years, Mitch McConnell hasn’t saved one coal job or created one coal job,” said Grimes. “I’ve been in our Kentucky mines. I’ve talked with our true American heroes about the struggles they are facing today and the struggles we have ahead of us tomorrow.”

Grimes said she will work to make sure a comprehensive mine safety policy exists as well as a commitment to miners and their widows to get their black lung benefits.

“Kentucky coal miners are tired of a senator who is just full of hot air,” said Grimes.

Clinton said he successfully represented Arkansas coal miners in 100 black lung cases when he was a practicing attorney there 40 years ago.

“It bothers me after all these years that any coal miner would ever have claims to black lung benefits disputed,” said Clinton. “One of the things in my whole life that I am the most proud of, I got to go into these miners’ homes. I got to see big, strapping people so weak in the lungs that they couldn’t push a little lawn mower across their front yard.”

“It’s to improve the lives of millions of Americans, Kentuckians,” said Grimes. “You do that by improving the economy. (Being a Clinton Democrat) means instead of staying focused as Mitch Mc- Connell does on the pettiness and dysfunction of yesterday, having a United States senator that knows politics is about the possibility of tomorrow.”

Grimes said the senate race is between two people with two very different visions for how the Commonwealth is to move forward.

“Whether we will stay with someone who has left us behind now 30 years, three decades, or we will finally be with someone who wants to move this state forward where it deserves and should be,” said Grimes. “Whether we will stay with a senator who has the audacity to come to east Kentucky to Beattyville and say in an area that has been hit hardest with this poor economy, it is not his job to bring jobs to the Commonwealth. Or whether we will finally have a senator who says it is my number one priority to put hard-working Kentuckians back to work.”

Clinton praised Grimes for her Kentucky Jobs Action Plan released at the beginning of her campaign.

It is wrong, Clinton said, to leave any place out and any place behind.

“More than anything else, Alison deserves your vote because of (Grimes’s Kentucky Jobs Action Plan),” said Clinton. “Every page of this is about you. It’s not about the politician. It is about you.”

During his presidency, Clinton visited Hazard in 1999 to promote the New Markets Tax Credit.

“It was the last, great economic initiative for small town, rural America,” said Clinton. “We did it in a bipartisan fashion.”

The senate race, Grimes said, comes down to a simple choice of yes and no.

“I believe Kentucky is ready for a senator whose vocabulary goes beyond the word no,” said Grimes. “Hard-wording Kentuckians working 40 hours a week are barely making enough to rise above the poverty level and they asked for an increase in the minimum wage. Mitch McConnell said no. I say yes.”

Grimes said she and McConnell differ on the issue of protecting interests of senior citizens.

“People like my grandmother, they need and deserve to have a United States senator that will fight to protect and strengthen Medicare and Social Security,” said Grimes.

Grimes said the November election is about holding Mc- Connell accountable for all that has happened on his watch, not hers. During McConnell’s tenure, Grimes said, thousands of coal mines have disappeared from Kentucky; the state has gone without funding needed to implement clean coal technology; and overburdens of EPA regulations have hit Kentucky the hardest.

“I think it sounds like we have a problem with whose been in the United States senate,” she said. “Are we ready to ditch Mitch?”

Grimes said she is the Kentucky candidate who will work tirelessly to make sure funding is available to implement clean coal technology and continue projects like in Mercer County.

“I am the Kentucky candidate who stands shoulder to shoulder having the United Mine Workers’ endorsement in this race,” said Grimes.