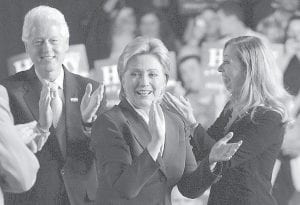 Hillary Rodham Clinton coasted to overwhelming victory in the Kentucky primary on Tuesday, a triumph of scant political value in a Democratic presidential race moving inexorably in Barack Obama’s direction.

The two rivals also collided in Oregon’s unique vote-bymail contest, and Obama predicted he would finish the night with a majority of all delegates at stake in the 56 primaries and caucuses on the campaign calendar.

“This is one of the closest races for a party’s nomination in modern history,” Clinton told supporters celebrating her victory. “We’re winning the popular vote,” she said, despite figures from competitive contests that show otherwise. “I’m more determined than ever to see that every vote is cast and every ballot is counted.”

Even so, she commended Obama, adding, “while we continue to go toe-to-toe for this nomination, we do see eyeto eye when it comes to uniting our party to elect a Democratic president this fall.”

She also said Michigan and Florida Democrats deserve to have their votes counted, a reference to the lingering controversy surrounding primaries in both states held in defiance of Democratic National Committee rules.

Party officials are scheduled to meet later this month to consider how – or whether – to seat all or part of the states’ delegates.

With votes counted from 97 percent of Kentucky’s precincts, Clinton was gaining 65 percent of the vote to 30 percent for Obama.

Almost nine in 10 ballots were cast by whites, and the former first lady was winning their support overwhelmingly. She defeated her rival among voters of all age groups and incomes, the college educated and non-college educated, selfdescribed liberals, moderates and conservatives.

Though Clinton has had a strong run through the late primaries, Obama has steadily outpaced her where it counts, in the race for national convention delegates.

With her Kentucky victory, Clinton picked up at least 33 delegates to at least 14 for Obama with an additional four yet to be awarded.

Overall, Obama had 1,931 delegates, less than 100 shy of the 2,026 needed to become the first black presidential nominee of a major party. The former first lady had 1,755.

Both candidates paused during the day to express best wishes to Sen. Edward M. Kennedy, the Massachusetts Democrat suffering from a brain tumor.

Obama said he was shattered to hear the news.

Said Clinton: “As a lifelong champion for social justice and equality, his work has made the path easier for me, for Senator Obama and for countless others. He’s been with us for our fights and we’re now with him in his.”

Regardless of the results of the two primaries, Obama was moving ahead on the assumption he would soon become the nominee. Party officials said discussions were under way to send Paul Tewes, a top Obama campaign aide, to the Democratic National Committee to oversee operations for the fall campaign.

Obama also decided to mark a victory of sorts. He arranged an evening appearance in Iowa, site of his critical Jan. 3 caucus triumph that launched him on his way through the primaries that followed.

“The question then becomes how do we complete the nomination process so that we have the majority of the total number of delegates, including superdelegates, to be able to say this thing’s over,” Obama told The Associated Press in an interview.

Clinton looked for a consolation for the strongest presidential campaign of any woman in history. She hoped to finish with more votes than her rival in all the contests combined, including Florida and Michigan, two states that were stripped of their delegates by the national party for moving their primary dates too early.

Not counting the results in Kentucky and Oregon, Obama was ahead of Clinton by slightly more than 618,000 votes out of 32.2 million cast in primaries and caucuses where both candidates competed.

The numbers do not include Iowa, Maine, or Nevada caucuses, nor do they count – as Clinton does in her totals – Florida and Michigan.

“There won’t be tonight, unless you decapitate Michigan and Florida, which violates our values and is dumb politics,” Bill Clinton said.

Kentucky, where Hillary Clinton concentrated much of her efforts in recent days, had 51 convention delegates at stake.

Oregon, where Obama invested his time and drew a crowd estimated by police at 75,000 over the weekend, had 52. The state also had the distinction of staging the only contest without a designated polling day. Instead, under a vote-by-mail system, election officials tallied all ballots received by 11 p.m. EDT on primary day.

The only primaries remaining are Puerto Rico, on June 1, followed two days later by South Dakota and Montana.

Increasingly, Obama has been concentrating his campaign on John McCain, the Republican nominee-in-waiting, rather than on Clinton.

The former first lady, too, has jettisoned the sharp attacks against Obama that characterized the race only a few weeks ago, although she bristled on Monday at his decision to focus on the fall campaign. “You can declare yourself anything, but if you don’t have the votes, it doesn’t matter,” she said in an interview with an Oregon television station.

Even so, there was no short- age of signs that the closest Democratic nominating campaign in a generation was reaching its final stages after drawing more than 33 million voters to the polls and shattering numerous turnout records along the way.

As recently as May 6, Obama trailed Clinton among superdelegates, the officeholders and party leaders who will attend the national convention by virtue of their positions.

But in the days following his convincing victory in the North Carolina primary and his narrow defeat in Indiana, Obama has gained the support of at least 50 superdelegates and taken the lead in that category. Clinton has gained nine over that period.

Obama also has picked up the endorsements of former Sen. John Edwards, who dropped out of the race in the early going, two labor unions and NARAL Pro-Choice America. The abortion rights advocacy organization had supported Clinton throughout her political career.

Fundraisers for the two campaigns have held quiet discussions on working together in the fall campaign.

Additionally, Obama’s top strategist, David Axelrod, disclosed he had contacted Clinton’s former campaign manager about joining forces for the general election. Patti Solis Doyle confirmed what she called informal conversations about how she might help the Illinois senator if, as expected, he secures the presidential nomination.