Clooney’s ‘Up in the Air’ flies true 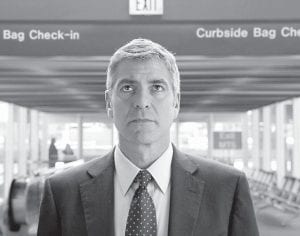 Actor George Clooney in a scene from his new movie, ‘Up in the Air.’ (AP)

On rare occasions, putting a novel through the Hollywood wringer does the story a real service.

The rather whiny tone of Walter Kirn’s “Up in the Air” vanishes in Jason Reitman’s extreme makeover of this travelogue comedy about a guy who traipses across America, firing people for a living while greedily counting the miles built up in his frequentflyer program.

Gone is the book’s fickle, possibly amnesiac, definitely disturbed main character, replaced by a lovably overconfident roadtrip warrior, a dynamo played to perfection by George Clooney. Gone or transformed are many of Kirn’s fly-by-night bit players, swapped out for strong supporting figures led by Vera Farmiga and Anna Kendrick.

And mostly gone is the self-absorbed narrowness of Kirn’s story, a one-man show for which Reitman has substituted an expansive, very relevant tale of corporate downsizing and the people suffering through it.

For two-thirds of the journey, “Up in the Air” flies even straighter and truer than director Reitman’s 2007 teen-pregnancy hit, “Juno,” delivering snappy screwball dialogue with deep touches of pathos.

The film strays off course in the final act, though, veering from an insightful portrait of willful disconnection in our age of portability and turning kind of mushy, kind of vague, kind of conventional.

People change, lessons are learned, but the movie ends up landing on familiar turf rather than the bold, exotic location where it seemed bound early on.

Reitman, who shares screenwriting credit with Sheldon Turner, jettisons the hazy meandering of Kirn’s protagonist, who’s grown weary of his traveling ways and is looking for an out.

Instead, Clooney’s Ryan Bingham lives for the life of airports, rented cars and executive suites. He expertly maneuvers from hub to hub, staying only long enough to pass out pink slips and offer a semblance of career-transition counseling to the people he fires for downsizing companies whose bosses are too spineless to do the nasty deeds themselves.

Ryan’s main goal is to reach the 10 million-mile plateau on his frequent flyer account, an aspiration jeopardized when his own firm decides to implement a program of firing people by teleconference, so they never have to leave the home office.

Just as Ryan meets his goddess of the skies, frequent-flyer soulmate Alex (Farmiga), his company dispatches him with straightout of-school efficiency expert Natalie (Kendrick) to test the firing from-a-distance technology that threatens to ground him for good.

“Up in the Air” peaks too soon, with a marvelous exchange in an anonymous airport as Ryan, Alex and Natalie debate and dissect one another’s values with grand humor but incisorlike ferocity.

From there, the movie descends to a safer altitude, offering up a big, though somewhat contrived, dramatic twist as Ryan reconnects with his family and begins to question the worthiness of his rambling.

Everything about the production is first-class: slick design, a well-chosen soundtrack and awards-worthy performances from Clooney, Farmiga and Kendrick, along with good turns from a supporting cast that includes “Juno” co-star Jason Bateman as Ryan’s boss and Melanie Lynskey and Danny McBride as Ryan’s soon-to-be wed sister and her fiance.

Reitman regular J.K. Simmons has a small but memorable part as one of Ryan’s angry downsizing victims, while Sam Elliott (who appeared in Reitman’s “Thank You for Smoking”), pops up in a wry cameo that caps off Ryan’s airmiles quest.

In a brilliant stroke, Reitman found real people who lost their jobs during the recession to go on camera and share their pain, weaving them into montages that bring tearful authenticity to the anguish Ryan leaves in his wake.

As he showed with “Thank You for Smoking,” Reitman has an impeccable talent for tearing out the spine of a novel and transposing it to the big screen, streamlining and simplifying a literary work without dumbing it down.

In its way, Reitman’s “Up in the Air” is every bit as smart as the book. And going Hollywood has made the story one for the masses, a film with great laughs and a touch of heartache that soothes even as it reflects the hard times we’re living through.

“Up in the Air,” a Paramount Pictures release, is rated R for language and some sexual content. Running time: 109 minutes. Three stars out of four.