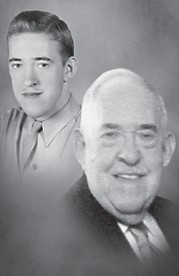 Born in Pike County, he was a son of the late Clyde and Mae Baldridge Daniels. In addition to his parents he was preceded in death by his wife, Ferne Williams Daniels; a sister, Mildred Craft; and a brother Herman Daniels.

Mr. Daniels was graduated from Whitesburg High School and worked in the coalmines as a young man. He joined the U.S. Army Air Corps as a nose turret gunner and flew 35 missions in the European Theater during World War II.

He and his wife lived in Miami, Fla., for 30 years where he worked as an aircraft mechanic. In 1978 they moved to Franklin, Ind., where he was employed at Holbrook Welding and Manufacturing for more than 20 years.

Mr. Daniels enjoyed biking around his neighborhood, fishing, and reading. He was a member of Franklin American Legion Post #205.

Online condolences may be sent to the family at www.swartzmortuary.com.