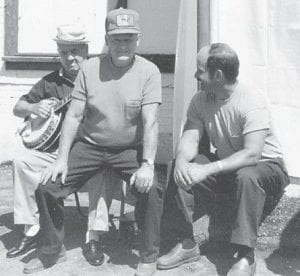 MARLOWE REUNION — Pictured in front of the Marlowe store at a Marlowe reunion are (left to right) the late Coy Morton, Clyde Hatton, and Charles Noble.

Hello everyone, hope you are all doing well and enjoying the pretty weather. Time is going so fast, it will soon be over. It already feels like autumn.

My husband Clyde is still very sick. He has been in the hospital two times in about a week. He is back at the Veterans Center now. I have been down there about every day and it sure wears me out. They are working on the road here, making it a three lane, and there are so many delays it’s hard to get anywhere.

I came back the Sandlick Mountain way to miss the traffic at the foot of the mountain. I saw Lenville Sexton sitting on his porch, looking up toward his family cemetery (which is always so well kept and beautiful) and I thought about all his family that were there, his wife Flora, daughters Lorene and Mary Rose, and his son Junior and some grandchildren. I know it’s a comfort to him having his grandson Paul Mark living close by. He has been blessed with a long life, way up in his 90s.

I wanted to stop by and talk to him. He’s been a longtime friend. I wish I had stopped by, but I thought I might aggravate him. He has been a hardworking man. I passed the garden where he always raised a lot of beans to sell. He enjoyed that. I’m rattling on. 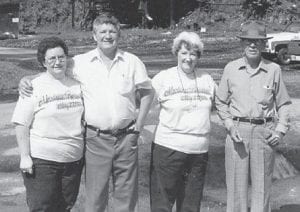 STIDHAM FAMILY — Pictured in front of the old Marlowe coal tipple at a Marlowe reunion are (left to right) the late Lucille (Stidham) Holbrook, the late Jr. Stidham, and Ruby (Stidham) Combs, and the late John Stidham, their father.

My nephew Bro. Caleb Howard preached for our church last Wednesday and he really preached outstanding. His little sister Gabrielle outdid herself singing. I never heard such a voice coming out of someone so little. We had a large crowd. It was good seeing Linda and Charles Dixon there. They are good friends or ours.

Our sympathy goes out to the family of Irene Ison of Whitco. There was about the biggest crowd I had ever seen there. It was good seeing Lynette and Johnny Mack Trent there and Janice Sue and Owen Bates. I loved talking to them.

I was hoping to see Sue and Tommy Trent. They were coming the next day. I didn’t get to go back. Clyde got real sick and I had to be at Hazard Hospital with him. I’ve been going down every day but one. Clyde isn’t getting any better, but he is getting good care. 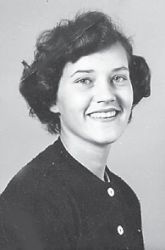 MARLOWE STUDENT — The late Kathleen Stidham was the daughter of the late John and Rosa Mae Stidham. She is pictured in a school photograph from 1955-56. EYE Care

Anna Watkins, you have been asking about Margaret Caudill (Nettie’s daughter). I did meet her at Walmart in the pet food department (where I usually am). She was with June Maggard. I didn’t recognize Margaret, but she recognized me. I hadn’t seen her in many years. I did know June Maggard though. I see her every now and then. She hasn’t changed that much. We found out we were the same age, but she’s prettier.

It was nice talking to my niece Margaret (Hatton) Combs the other day. She said her Aunt Laura was doing well. She is the only one left of the large family of the late Mary and Bill Napier, formerly of Marlowe.

Sandra and Billy Hatton were at their lake house this weekend. Sara and Chris Hatton and their family were at the camper at the lake also.

Well, news is scare this week. There’s not much going on at the hospital and Veterans Center. I have made lots of friends there. I enjoy talking to Barbara Prichard.