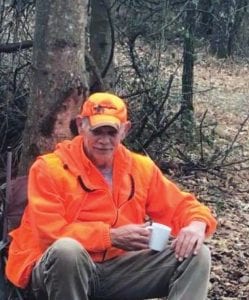 Lannie Day, construction foreman for the City of Whitesburg, died May 2 at age 64. “As everyone knows, Lannie was an outdoorsman through and through. He loved hunting and fishing and most of those vacation days were saved up for hunting season,” Whitesburg Mayor James W. Craft said. (Photo courtesy Helen Roberts)

Lannie Day, construction foreman for the City of Whitesburg, died unexpectedly Sunday in a Lexington hospital. He was 64.

Day, of Little Cowan, died at the University of Kentucky Medical Center, where he was being treated since suffering chest pains on Sunday, April 26. Friends who spoke with Day on May 1 said he was in good spirits and looking forward to his release from the UK facility. He died the next day after an aortic aneurysm ruptured.

Day’s sudden passing came as a shock to his friends on Little Cowan and elsewhere and to his coworkers with the city.

“We lost a good friend yesterday — not to COVID 19. It was his heart and it was a shock,” Little Cowan resident Helen Roberts, who along with her husband, Danny, was among Day’s closest friends, wrote in a Facebook tribute to Day. “(He was) one of the best people I know. He would do anything to help you out. He was set on doing it correctly and you couldn’t change his mind. Lannie was one of a kind.” 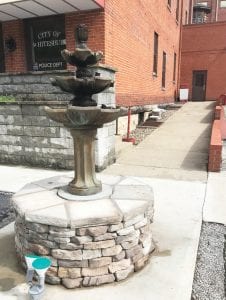 One of the late Lannie Day’s final construction projects for the City of Whitesburg was this stone pedestal that sits on the corner of the Main Street side of City Hall. Day, who died unexpectedly May 2, built two of the pedestals to hold two fountains like the one pictured here.

Under an order from Whitesburg Mayor James W. Craft, flags at City Hall were lowered to half-staff on Tuesday to honor Day, who had worked for the city for the past 10 years. In keeping with the state’s COVID-19 social distancing regulations, a private funeral service was held at noon Tuesday at Letcher Funeral Home in Whitesburg. City employees were permitted to pay their respects to Day during an hour-long visitation held before the funeral.

“Lannie Day was one of the most amazing men I have ever had the honor and privilege of knowing,” Mayor Craft wrote in a tribute to Day. “He was very caring, helpful and most importantly he took pride in everything he did. … I hired Lannie in 2010 to be the carpenter for the city and its many diverse projects and he did those to precise perfection when called upon. Lannie not only did his job with extremely high skill, but he quickly became one of the most beloved and relied on employees not only by me, but by all who knew Lannie or worked with him.”

According to Craft, Day’s latest project for the city was the construction of stone pedestals on which new fountains now rest on the front corners of City Hall. Craft said Day was also responsible for repairing a City Hall roof that was left leaking after a powerful windstorm swept through Letcher County on the night of April 5. Craft said Day’s roof repairs were a success, noting there were no leaks during Monday night’s unusually heavy rains.

“As you’re traveling through Whitesburg, chances are you will drive by or walk upon many of Lannie’s carefully planned out and professionally constructed sidewalk repairs,” Craft said. “As everyone knows, Lannie was an outdoorsman through and through. He loved hunting and fishing and most of those vacation days were saved up for hunting season. He was also a big fan of University of Kentucky basketball and some of my most treasured memories of him were sitting around discussing the games over a cup of coffee and then segueing into the ‘planning stages’ of the next project that he would be ready to get started on.”

Day, a 1974 graduate of Whitesburg High School, was a son of Bessie Potter Day of Little Cowan and the late Jack Floyd Day, who worked at the Whitesburg Post Office for several years after retiring from the military.

Survivors in addition to his mother include a son, David Day of Little Cowan; three brothers, Wayne Day of Mary Esther, Fla., James Ronald Day of Columbus, Ohio, and Randy Day of Little Cowan; and a grandchild, Adalyn. He was preceded in death by a brother, Kenneth Isaac Day.