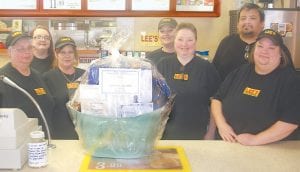 A FRIEND IN NEED — Employees of Lee’s Fried Chicken in Whitesburg came to the aid of co-worker Jonathan Day after his foot had to be amputated due to complications of diabetes. Day, now 41, has been off work for nearly two years and did not have insurance. The employees are raffling off a basket to help him and his wife, Alicia Anderson, keep their house and car. Pictured (left to right) are: Vickie Short (Anderson’s sister), Ashley Bates, Missy McFall, Ollie Meade, Michelle Sexton, Jonathan Day and Alicia Anderson. (Photo by Sam Adams)

Jonathan Day didn’t want to go to the doctor for something as minor as a sore on his foot.

As a Ojibwe man, Day knew he was at risk for diabetes. First Nations men in Canada, where Day was born, are 2.5 times as likely to have diabetes as non- First-Nations men, and Native Americans in the U.S. are twice as likely as whites to suffer the disease.

Day checked his blood sugar regularly and knew it had been running high, but treating diabetes is expensive without insurance. Besides, it was a Monday, and he couldn’t afford to miss work at the Lee’s Fried Chicken restaurant in Whitesburg where he had worked for 19 years. The 41-year-old Jackhorn man ignored the pain, hobbling along behind the counter for the next five days. The foot kept feeling worse, and by that Friday, he was sitting on a milk crate to dip ice from the freezer. On Saturday, he went to the doctor.

“He said there was nothing they could do, and sent me to Pikeville,” he said. “On Sunday, they came in and gave me a choice — either my foot or my life.”

He chose to live, and doctors removed his foot the same day. A week later they took much of his lower leg as well. He was on his way to recovery physically, but financially, he was as sick as he could possibly be. He didn’t have insurance, so every medical procedure resulted in another bill he couldn’t afford. He applied for Medicaid and for Social Security, but he kept getting turned down; he wasn’t told why.

Day said he even thought about moving back to Canada, but he moved to Kentucky when he was 21, and it would have taken months to regain eligibility for the Canada’s national health insurance, and he kept holding out hope that he would get insurance here. With his wife, Alicia Anderson, also working at Lee’s, a daughter in high school and another daughter in college, he didn’t want to have to leave.

“We were on the brink of losing our house and our car,” Day’s wife, Alicia Anderson, said.

That’s when their coworkers stepped in.

They approached area businesses about donations, not of money, but of products. They built a basket worth $300, and sold raffle tickets that raised $2,100 to pay the Day family’s mortgage, car payments and car insurance so Alicia could get to work, and the family wouldn’t lose their home. Two co-workers told a man they had built a handicapped ramp for about Day’s situation, and he gave them his ramp when he moved to the housing project. They installed it on Day’s home.

Now employees have put together a second basket of donated goods worth nearly $1,000 that they’re raffling to raise more money to keep the family stay afloat while he waits for a decision on Social Security.

Restaurant manager Michelle Sexton said Day has been a faithful employee, and even when he worked full time at other places over the years, he never left the Lee’s payroll, coming in whenever they needed help.

“He was my employee for 19 years, and he was a very good employee,” Sexton said.

“I want to say thank you to all the business, and everyone who’s bought a chance or donated money,” Alicia Anderson said.

While the help from coworkers has kept the family from losing everything for now, they’re still waiting for a hearing on Social Security. Someone with Social Services finally told Day he wasn’t eligible for Social Security or Medicaid because he is still a Canadian citizen. Day doesn’t need a visa to work here because he is Ojibwe, and 200-yearold treaties among the U.S., Canada and tribal governments allow First Nations peoples “free travel and trade.” Despite that, he had to apply for a “green card,” or permanent resident status, to get insurance. He got signed up on Medicaid after he got the permanent resident card, and Mountain Comprehensive Health Corporation wiped out his debt there because of his financial circumstances.

Nearly two years after the surgery, Day is getting around on a prosthetic leg, but still hasn’t gotten his gotten his finances settled or had physical therapy to teach him how to walk without a cane.

He’s hoping that will come soon. Meanwhile, his co-workers are still selling raffle tickets, and Day is waiting to find out if 20 years of paying into the U.S. Social Security system will pay off.