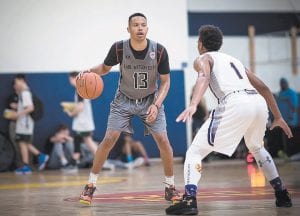 Jemarl Baker’s AAU coach believes he’s going to surprise a lot of people with his play at Kentucky.

It was not a surprise to Justin Downer when California guard Jemarl Baker got a scholarship offer from Kentucky earlier this month — or that he accepted it.

“He is a kid that is very confident in his abilities,” said Downer.

Downer is an assistant coach for Earl Watson Elite — the team Baker played for on the Under Armor circuit last summer and made a league-best 41 3-pointers.

Earl Watson Elite head coach George Zedan and Downer met with Calipari at the Final Four in Phoenix and heard what the UK coach was looking for from Baker.

“It is such a great fit,” Downer said. “With Kentucky basketball, you need a kid with a special mentality. That’s why he improved so much and why this is such a great opportunity for him. He averaged 17 points per game for us led us in 3’s. Those are absurd numbers on a team that’s really good. He can really score it. He’s going to surprise a lot of people.”

Calipari reminded the two coaches that no one expected Devin Booker to be a one-and done lottery pick and NBA star as a rookie when he got to UK.

“Cal kind of referred to Jemarl the same way,” Downer said. “I am not saying he is a one-and-done player, but you are going to be impressed.”

“Our game plan was totally centered around stopping him. We got him for a while but he kept his poise. He never got in a rush,” Downer said. “We denied him the ball. We used a box and one. But he never forced anything. He trusted his teammates. He knew with all the work and preparation he puts in that we could only contain him so long, and he was right.”

Baker is a consensus four-star player and top 70 recruit. Yet not a lot was known about him until he signed with Kentucky because he committed to California before his junior season and no one paid a lot of attention to him. 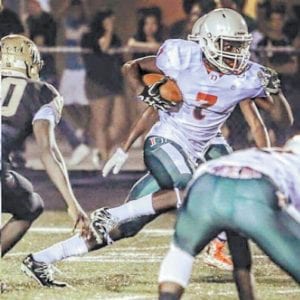 Florida receiver Shocky Jacques-Louis had been ready to commit to Kentucky for two years.

“Up until two weeks ago he was listed as 6-2, 165 on some recruiting sites. He is 6-4, almost 6-5, with a long wing span,” Downer said. “He can create his shot. He’s not just a spot up shooter. He’s really good inside 12 feet with post moves but he also creates for others. He’s worked real hard at become a point guard and not just a shooting guard. He can give you different looks.

“To be at the next level, you have got to have that one great skill and his is shooting the ball. He’s arguably the best in his (recruiting) class. But he’s a total player. He competes every possession no matter who you are playing. He never takes a possession off. He’s always battling and competing on both ends. Kentucky fans are going to love that, too.”

“Before they were very good, we would get guys that were just okay. Then they started getting better and we got DeShawn Mobley and he was player of the year in our conference. So I said, ‘Coach, I am cheering for you to get better because that means we will get better’ and I saw that.”

Hood thought the biggest thing Stoops did to change the program was making recruiting Ohio a priority from day one.

“It’s easy to say when you not sitting in that chair (as UK coach), but I always thought why would someone not go north to recruit. Why would everybody want to battle and try to beat all the SEC schools in Florida and Georgia when you are the northern most school in the SEC,” Hood said.

“When coach Stoops got here he did that right away. He went and started recruiting Ohio and I thought that is what needed to be done at Kentucky. Go up there and beat Purdue, Illinois and Northwestern rather than bang your heads against the wall down south and I saw that immediately when he got here. Now you see those players running around from Ohio and I know my thoughts were correct and they are making us better.”

Kentucky picked up a verbal commitment from Florida receiver Shocky Jacques-Louis last week. He’s only rated as a three-star player and had just 20 catches for 308 yards and five scores last season.

However, Adam Regan, prep sports writer at The News-Press in Fort Myers, Fla. (news-press.com or @ NP_ AdamRegan on Twitter), says not to underestimate the talent the 6-0, 170-pound player has. Regan says his numbers likely won’t be eye-popping this season, either.

“There are a few reasons for that, none being a reflection of his ability. First, quarterback play and blocking up front aren’t very consistent in southwest Florida,” Regan said. “There isn’t a lot of time to throw the ball and most quarterbacks aren’t accurate when they’re being chased out of the pocket almost instantaneously, thus giving Shocky fewer opportunities.

“Second, Shocky plays on a stacked offense at Fort Myers Dunbar where the running game was quite strong and he was sharing targets with two other Division I prospects.”

Regan says one other thing about Jacques-Louis stands out to him.

“Shocky has a serious drive to prove himself not just on the football field, but in life. He’s driven to be his best in the classroom because he recognizes the value of education,” Regan said. “He has a good head on his shoulders and learns from his mistakes. I think that will make him coachable at the next level.”

Jacques-Louis said he was ready to commit to UK when he got an offer as a freshman but family members advised him to wait. He will attend team camps this summer, but doesn’t plan to attend any individual camps or take any college visits.

“I want for UK fans to know I am 100 percent committed to the Wildcats and have always been. We are going to win championships,” he said. in the Big Blue Nation. It takes a certain kind of player to play for him,” Hock said.

“One And Not Done” director Jonathon Hock of New York had heard plenty about Kentucky basketball fans, but that didn’t prepare him for what he learned during the 20 months he spent putting together the ESPN documentary on coach John Calipari.

“Nobody goes all in like that for any team. There is a commitment of the community to the team and program and these guys that come from all over the country have no idea what it will be like and the intensity of it,” Hock said. “What Cal has to navigate each year and manage the kids and how they handle it is incredible. He has got to get them through that in a way … it’s easy when it is going well but less so when things are not going well.

“I think Cal builds a cocoon around the players. I expected they would be involved in much more of a college experience. But they are highly, managed pretty much every minute of the day and they are pretty much treated like NBA players.”

Hock said there was a common theme from all of Calipari’s former players now playing in the NBA that he interviewed.

He thought he would be a high school coach, but his wife, Misty, pushed him to follow his dream of becoming a college coach.

“In the summers I would jump in my car and work basketball camps all over trying to network and getting to know people,” Spradlin said.

He got a “low level” spot on John Calipari’s staff at Kentucky as an intern/graduate student.

“I did not know anyone. I would show up early and stay late to try and learn all I could,” Spradlin said. “After two years, I got to be assistant director of basketball operations for three years. I got to go to three Final Fours and meet so many great players and people. Then I was lucky enough for (Sean) Woods to hire me on his staff at Morehead.”

He credits his wife for most of his success. They are high school sweethearts who have known each other for 16 years — more than half their lives.

“She has had an unbelievable role in my career. It has been difficult for her and my 4-year-old son Bentley,” Spradlin said. “I have had my focus on this team at a high level. They have been kind of neglected. I hope I get the opportunity soon to reward them and go back and be a husband and father.

“Misty has great energy. She and I are very open about what I have going on. She is not afraid to give her opinion. Your spouse has to be all in with what you are doing. She knows all our players and she’s always in my corner, which is nice to have. We both learned at UK just how hard a coach has to work, and she understands that and I love her for that.”

Quote of the Week: “Is he Tyler Ulis? I am not ready to go that far. He is 6-feet, which is small by Kentucky guard standards but he knows how to make plays. He’s a good team guy. There will be no issues with him,” veteran sportswriter Dick “Hoops” Weiss on UK signee Quade Green.

Quote of the Week 2: “I think the cheerleaders were the most athletic people on campus. They do things that I could never do, or want to do. I have attempted to do some things like they do, but no way could I do it,” former UK basketball player Marcus Lee on UK’s national championship cheerleading team.

Quote of the Week 3: “I should be in high school right now, but to be here with dudes that are like three years older than me, two years older than me, it was fun. I messed up. I dropped a pass. Dropped a touchdown. But for the most part, I think I did well,” freshman receiver Clevan Thomas Jr. on the Blue- White Game.