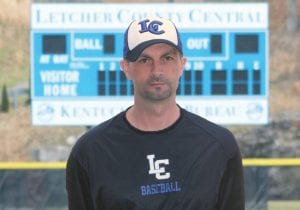 Bryan Dean has been LCC’s only baseball coach. (Photo by Tonya Aslinger)

Dean, 43, has been hired to coach baseball and teach social studies at Columbus High School in Mississippi.

Dean said he had turned down other job opportunities during his tenure at Letcher Central in an effort to remain closer to his two oldest children who were both graduated from Sheldon Clark High School in Martin County.

But with his son Bryce, 20, now attending the University of Kentucky and his daughter Kelsey, 19, playing softball at Union College in Barbourville, Dean was free to begin looking at job openings. He considered two offers in Alabama after attending two University of Alabama football games last fall.

As the Cougars began spring practice toward the end of a long, cold winter, Dean decided to pursue a coaching position in a warmer climate.

Th team’s record for the 2014-15 season was 14-23. However, the Cougars won three 14th Region championships while performing in 221 baseball games in the 10 years Dean was here.

Dean said he stayed at Letcher Central as long as he did because of respect for his players and their families.

“You want to be loyal to your kids and parents,” said Dean, who was a single parent during the 2012 baseball season.

“I couldn’t have coached without their help,” said Dean.

Dean has since married Dianna Dean and together they have seven children. Three of the younger children are Olivia Champion, 10, Nick Champion, 7 and nine-month old Haiden Dean.

Dean’s hiring in Mississippi was approved Monday night by the Columbus Municipal School District. Dean says he is ready to rebuild the baseball program at Columbia High School, which had an interim head coach this past season.

“They have a lot of potential,” said Dean. “The administration is excited.”

Dean said he will miss the players he has coached at LCCHS, but will stay in touch through social media.

The head coaching position at LCCHS hasn’t been posted.