Wenyen Gabriel thought it would be “intriguing” to play at Kentucky after having coach John Calipari personally recruit him for months. That’s why the 6-10 forward from Wilbraham & Monson (Mass.) signed with the Wildcats as part of Calipari’s No. 1 recruiting class for next season.

“The positionless basketball he talks about is exactly what I wanted. I believe in what he is doing. It’s really exciting to think about playing for him and how he will develop me. I want to show what I can do and it will be fun,” said Gabriel. “Everything I read and heard about Kentucky turned out to be true. Now I just want to be the best player I can be.”

Even though his team lost its season-opening game to Spainbased Canaria 59-56, Gabriel had 21 points, 11 rebounds and three blocked shots in the National Prep Showcase in Connecticut.

Gabriel and his teammates will be in Lexington December 12 to play in the Thoroughbred Classic at Dunbar. Kentucky hosts Arizona State earlier that day. 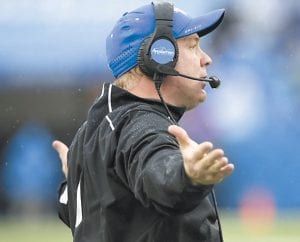 Kentucky head coach Mark Stoops gestured to his team during the second half against Louisville in Lexington. Louisville won the game 38-24. (AP Photo/David Stephenson)

“When I told him about it, his eyes got as big as they can be. You guys (in Kentucky) are going to love him,” coach Mike Mannix said. “It’s a great chance for us to play in a different part of the country and show our players what it is like to be around a top Division I program like Kentucky. We hope to check out at least some of the Kentucky-Arizona State game.”

ESPN national recruiting director Paul Biancardi thinks Gabriel will fit nicely into the Kentucky program. He had a dominant summer on the adidas Gauntlet averaging 17.4 points and 8.6 rebounds per game and made the biggest jump in the ESPN rankings — 84th to 23rd — any player had ever made. He went from having scholarship offers to Providence and New Hampshire a year ago to picking UK over Duke.

“The third week in July he had a breakout performance in the Las Vegas adidas tournament and all the bluebloods got on him them. That’s when he really got hot,” Biancardi said. “He utilized his great length and reach to score and rebound. He played with tremendous energy and worked hard on the defensive end. 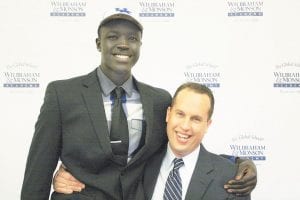 UK signee Wenyen Gabriel and coach Mike Mannix will be in Lexington Saturday night for a game at Dunbar High School. Mannix said Gabriel put in NBA-like workouts to improve his game after last season.

“He is a good athlete, but not a great athlete. He can shoot the jump shot or drive the ball. He can go inside and post up or jackknife his way to the rim. He is slender, but he is terrific on the glass.”

Mannix said it was a case of Gabriel improving over the summer but also being undervalued going into summer play.

“ I had continuously told schools last year that I thought they were missing the boat on him,” Mannix said. “I was contacting a lot of mid-majors and some high majors because he only had a few low major offers. I was telling them he was 6-10 with a good foundation of perimeter skills and improved back to the basket game and would keep improving. But he also was not the player he is now. He really worked hard on his skills.”

Gabriel, who is originally from South Sudan, is in his second season playing for Mannix. He repeated his junior year last season and Mannix remembers telling UK assistant Tony Barbee that in the spring Gabriel put in the time and effort that “I have seen NBA guys put in” during offseason workouts.

“During our season he shot the ball really well. There were a few games last year where he shot three 3-pointers in a game and was almost a 50 percent shooter in some games. He shot accurately, but not with as much confidence as he has now,” Mannix said. “Last spring he just put in a ton of work to really get to the next level in terms of his perimeter jump shot and playing outside.

Mannix said the way Calipari operates and presents the UK program separated UK from the rest of the schools with Gabriel.

“He felt a close connection to Cal even though they had talked only on the phone for a month and a half before Cal came here. When they sat down and talked, you would have never guessed it was the first time they had talked in person. It was just a natural fit,” Mannix said.

“He has a good grasp of Kentucky basketball. Once he committed, we talked a lot about the history of the program and I told him about who was there before coach Cal. He knew all about the years with Cal, but I talked to him about the generations of different players and even brought up coach (Joe) Hall to him a little bit. I shared all the history and tradition I could.”

Mannix recalled how excited Gabriel was during his signing ceremony at the school, which was attended by 40 to 50 students and the same number of teachers, administrators and alumni.

“He had been through this whole recruiting process and it was somewhat tiring at times. He did enjoy it and the things that came with it when he did commit October 1. He did interviews and felt the love from Kentucky fans. Signing was kind of like the cherry on top (of the ice cream),” the coach said.

“He’s a kid that just gets it. He has great social skills and is really personable. I would say he has a 100 million dollar smile. I talk to him a lot about that smile. No matter what kind of day I am having, once he walks in and smiles 99 times out of 100 it will make me forget how busy I am or how crazy things are.”

Mannix took Gabriel and another teammate out for dinner with his wife and two sons after Gabriel signed with Kentucky.

“He’s just like a family member. He is engaged in what you are doing. His phone was going off like crazy, but he was not glued to the phone. He was talking to us, talking to my sons. He shared food with them,” Mannix said. “He’s just great to have around and Kentucky fans will love him. He lets me coach him and I try my best just to let him play. It works out pretty well for us both that way, too.”

It was bad enough that Kentucky could not stop Louisville backup quarterback Lamar Jackson in last week’s 38-24 loss to the Cardinals after UK had a 21-0 lead 10 minutes into the game. Jackson ran for 186 yards and two scores on 17 carries — an average of 10.9 yards per try. He was only 8-for-21 passing but threw for 130 yards and another score.

So why couldn’t UK stop him?

“They caught us off balance with the quarterback change. They made us look foolish at times,” Kentucky coach Mark Stoops said.

Caught off balance? How could UK have not been ready for a quarterback who has played regularly for Louisville all season and started some games?

“We had some guys on the edge that were just getting outran and not playing with proper technique and not understanding where their help was within the defense. And he just flat out made some plays. He outran us and really made us look bad on the edge, on the perimeter on some plays,” the coach said.

“They just made adjustments and we didn’t make the right adjustments. Jackson has a quick twitch and was hard to stop. They did a couple of things we did not see (in pregame preparation),” defensive end Farrington Huguenin said.

“With a scrambling quarterback you have got to adjust the defense and we did not make the adjustments,” safety A.J. Stamps said.

Not making halftime adjustments is something UK struggled with all season on both defense and offense all season and a big reason UK was only 5-7 after a 4-1 start.

It wasn’t just UK’s defensive collapse, either. The offense was non-existent after the first quarter in Drew Barker’s second start at quarterback.

“I don’t think at any (point) this year, we threw the ball like I’m used to throwing it,” Dawson said. “There’s just an unsettledness into our pass game right now that has to resolve itself for us to be good on offense. You gotta be able to throw and catch. If you can’t throw and catch, especially in our offense, it limits you.”

You think? However, it’s more than throwing and catching. It’s called coaching. However, Dawson constantly called plays that left many wondering why. Either Stoops didn’t want him to run the offense and tempo Dawson said he would use or Dawson couldn’t teach his players what to do.

Stoops said after the Louisville game he had confi- dence in Dawson and would not discuss possible staff changes for next year that he’s obviously going to have to make.