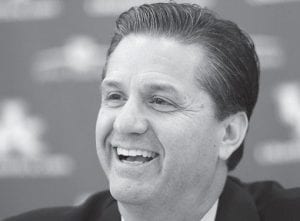 With John Calipari at the helm of the SEC’s flagship basketball program, coaches say the conference is heading in the right direction.

In addition to the buzz swirling around Calipari and UK, several of the better players in the Southeastern Conference last year are returning to school.

Last season, it appeared to be on its death bed.

Only three SEC teams made it to the 2009 NCAA tournament and mighty Kentucky was not one of them.

Now the winningest program in men’s college basketball has a new celebrity coach who has assembled the best incoming freshman class in the country, according to various recruiting web sites.

Calipari, hired on March 31, embraces being an ambassador for the university and says he has been busy.

“Those first 90 days are vital that you get off running and that you do so many things,” Calipari said. “One of those is just learning and I’m learning as fast as I can.

“It’s been an absolute whirlwind.”

A whirlwind not without a couple of hiccups. His former school, Memphis, faces possible major NCAA rules violations, though the NCAA has said Calipari is not “at risk.” Calipari also lost last season’s leading scorer, junior Jodie Meeks, who opted to take his game to the NBA. Meeks was drafted 41st by the Milwaukee Bucks on June 25.

The fact reporters were asking other league coaches about Calipari and Kentucky, four months away from basketball season, showed the impact of the new hire, Mississippi St. coach Rick Stansbury said.

“It’s very obvious already the impact he’s had,” Stansbury said. “All through that state, that’s all everybody’s talking about.”

And the timing couldn’t be better.

“Last year whatever the perception was, it was fair,” Tennessee coach Bruce Pearl said. “It was accurate. The league was young.”

Experience will be on the conference’s side next season. All- Conference players who considered the NBA draft but decided to return to campus include Kentucky’s Patrick Patterson, South Carolina’s Devan Downey, Tennessee’s Tyler Smith and LSU’s Tasmin Mitchell.