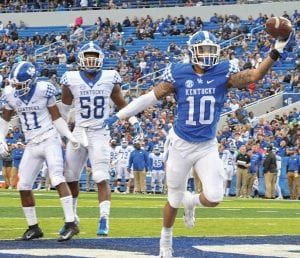 Not having Benny Snell running the ball will be different for UK’s offensive line but assistant coach John Schlarman is convinced A.J. Rose and others will do just fine in the backfield this year. (Vicky Graff Photo)

What will it be like for Kentucky’s offensive line not to have Benny Snell running the football?

Snell had three straight 1,000- yard rushing seasons and became UK’s all-time career rushing leader. He’s now in the NFL after being drafted in the fourth round by the Pittsburgh Steelers.

“I am excited about the running backs that we are going to be blocking for. Those guys have showed a lot of talent with A.J. (Rose), (Kavosiey) Smoke and (Chris) Rodriguez,” Schlarman said.

Schlarman, a former UK offensive lineman, says a lineman’s mentality doesn’t change regardless of who is running the football.

“Obviously a guy like Benny can make you look good at times but I think the guys we have got are going to make us look good at times, too,” Schlarman said. “I don’t think for those guys (in the line) anything has really changed mentality-wise.

“Will we miss Benny and the things he brought to the table? I am sure we will. But it is like what do you do next? Different year. Every year is like that. You have some pieces that move on, you have some returning and then you have some new ones. I think it is just a matter of seeing how it all fits together and I am confident it will fit together just fine.” 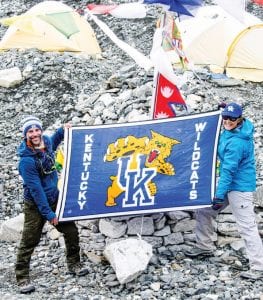 Chip, left, and Krystal Dittus made sure everyone at the Mt. Everest base camp knew they were Kentucky fans.

Kentucky natives Krystal and Chip Dittus often plan vacations to watch Kentucky basketball postseason games even though they now live in Key West, Fla. This year, however, the two UK fans did something a little different for their special trip — they went to Nepal and hiked to the Mt. Everest base camp in May.

It was no surprise that the trip included UK gear to show their loyalty to the Cats.

“That was planned from the beginning and we even bought a new baseball cap for the trip. One of our porters, the amazing people who climb the mountain carrying approximately 100 pounds — some of which was our gear — liked the UK hat so we gave it to him,” Krystal Dittus said. “Now UK is being repped on the trail all the time by a local.”

Doing this hike meant the couple decided not to attend the Southeastern Conference Basketball Tournament in Nashville, an event they love to watch. That made me wonder why they decided to do a hike to the Mt. Everest base camp instead.

“We had climbed Ben Nevis, the highest mountain in the United Kingdom, which is at an altitude of 5,000 feet in Scotland. After that we started watching shows on TV about Mt. Everest and thought that would be neat to go there,” Krystal Dittus said. “We weren’t sure if it was possible to hike to base camp so we started investigating. Turns out you can so we decided to do it.

“It took about six months of planning, which was mostly deciding on which outfitter to use. We were lucky in that Chip’s cousin teaches in an overseas school in Bangkok and she recommended the guide we used based on her friend using him on (before).”

With all the news recently about 11 people dying trying to make the climb to the top of Mt. Everest, I thought “only” getting to base camp still seemed like a huge challenge.

“We met our guide in Khatmandu and from there we flew to the town of Lukla which is at 9,000 feet. Then you start hiking. We would walk about 4-6 hours a day and then spend the night in tea houses, which are little hotels on the trail,” she said. “They are not fancy and usually consist of a common room that serves as the dining hall and then a room with two beds.

“Sometimes you get your own bathroom but more often than not you share a common restroom and hope it’s inside and a sit down toilet … in Nepal, sometimes they are squatting toilets.

“Twice we stayed in the same town for multiple days to get used to the altitude. That is the biggest concern with the trip, avoiding altitude sickness. If you develop that the only cure is to go back down to a lower elevation which ends the journey.”

Krystal Dittus said one of the best parts of the climb for her was getting to eat lunch at base camp with some Sherpas, one of the ethnic groups native to the mountainous regions of Nepal, who were going to to the top of Mt. Everest as a charity event to raise money for widows who lost their husbands on Everest.

“Generally hikers like us only have a small area at base camp to visit as they don’t want hikers running all over and getting in the way of the climbers. However, our guide is friends with the group where we ate lunch with so were able to proceed through the checkpoint and had free reign to roam around camp and were also able to get on the Khumbu Glacier,” Krystal Dittus said.

However, the trip “only” to base camp was not easy for these two UK fans.

The final day of the hike was at an elevation of 18,000 feet where one has only about 50 percent of the normal oxygen level.

“It was like walking through knee high mud and every step was sheer will power as we hiked about eight hours total that day. It was exhausting and exhilarating at the same time but worth it to make our goal,” she said. “We never felt scared or in danger but some of the terrain was treacherous with big rocks and uneven footing, so you had to be very careful not to fall or sprain an ankle.”

Obviously weather in Key West where the couple lives is far different than what they faced at Mt. Evert. They both scuba dive but to prepare for this they did cardio workouts or hikes while wearing masks that simulated altitude starting at 3,000 feet and working their way up.

“I don’t know if it actually prepared us but we made it so I guess it helped some,” she said.

She also said the weather stayed nice until near the end of their journey when it was cold during the day as well as at night.

“We just layered clothing and and the guide provided warm sleeping bags and fleece liners for sleeping,” she said.

Friends are used to the couple being a little different. During UK games, Krystal jokes that neighbors have learned not to pay attention to the screams and/or noises depending on how the Cats are doing.

“Reactions (to going on the trip) varied from ‘why would you do this,’ to ‘please don’t die’ or ‘that is so amazing,’” she said before adding everyone also encouraged them to take and share pictures, which they did.

“Chip would definitely do it again and is planning to go to Kilimanjaro, the highest mountain in Africa,” she said. “I am glad I did it but would not do it again.”

After all, how many SEC Tournaments can a die-hard Kentucky fan miss even if it is for an adventure like this.

“Cal (John Calipari) couldn’t keep him off the court. Cal wants to win, and he said he just couldn’t keep the kid off the court (late in the season),” Riley said. “He had grown so much during the course of the year. He had so much confidence in him, so I think he’s a complete player that will compete defensively (and) get better.

“He adds depth … he is the perfect complement, I think, to any player because he can space the floor and shoot the ball. You can also put the ball in his hands, he’s a catch-and-shoot player, he’s a pick-and-roll player, but what I like about him is that his work ethic is second to none … I think he’s going to fit right in with all of these guys.”

“Pat Riley has said to me before, ‘The best thing about your guys is they know how to fight, and the second thing is that they’re good teammates because they know how to share here,’” Calipari said.

“It doesn’t mean that we don’t have volume shooters in the NBA; we do. Six or seven guys that are good volume shooters, but they weren’t here (to do that). They learned to be good teammates. Probably the best compliment that could be made is what he said right there.”

Calipari said Adebayo texted him as soon as Herro got drafted wanting his phone number.

“He texted Tyler and said, ‘You better be ready to work. That is what this organization is about.’ He showed me, Tyler sent it to me and I said, ‘He (Bam) has no idea does he?’ He (Tyler) said, ‘He has no idea,’ because that is what Tyler is about, and they knew that.”

For just the second time in his 10 years at Kentucky, John Calipari will have a starting point guard returning to lead his team.

Andrew Harrison came back for a sophomore season and UK went 38-0 before losing in the Final Four to Wisconsin in 2015. Now the Cats will bring back point guard Ashton Hagans from a team that reached the Elite Eight before falling to Auburn.

“It’s nice to have players back. We have four really quality players back,” Calipari said.

In addition to Hagans, Kentucky also returns Nick Richards, EJ Montgomery and Immanuel Quickley off last year’s team. For some teams that might not be a lot, but for Kentucky it is a lot.

“The last time we had four players back who were quality players like that was 2014-15. I enjoy coaching guys two, three and four years,” Calipari said. “In this, what I do, you just want people when they leave to be prepared and ready for success. That’s the whole thing.

“We’ve had some guys leave too early, but it wasn’t my choice. They were counseled, ‘It might be too early. You might want to think about this.’ But, when they decide to do it, you’re all over it to help them. But it’s nice to have guys back.”

Quote of the Week: “I kinda find it funny how history repeats itself and people don’t see the true value of a player. Your rank and all these numbers, stars, whatever. It’s just amazing how it all work. I’m finally glad that I’m on a team with an organization that values me,” UK all-time rushing leader Benny Snell on dropping to the fourth round in the NFL draft before landing with Pittsburgh.

Quote of the Week 2: “He can shoot it. He rebounds very well for his size, especially on the defensive end. He’s got good size and strength. I think he can improve his decision making, sort of become a more versatile scoring threat. I think he can become a much better defender. I think he’ll be among the top players in college basketball next year,” ESPN analyst Jay Bilas on Louisville forward Jordan Nwora.

Quote of the Week 3: “I really liked the idea of them being on campus. I can remember being a student and driving past and wishing I could go volunteer but I never had time. It’s always been in the back of my mind to do a concert, so I figured this was an obvious choice to benefit from the concert because what they do for families is incredible,” former Wildcat Isaac Humphries on why his recent Lexington concert benefitted the Ronald McDonald House