Coach’s ties to Jenkins gives us reason to cheer 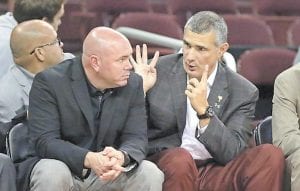 ON THE BENCH — South Carolina assistant head coach Matt Figger (left) listens as Gamecocks head coach Frank Martin discusses strategy. The Gamecocks now face No. 1 seed Gonzaga (36-1) in the national semifinals on April 1 in Phoenix, Ariz. The Bulldogs won the NCAA West Regional with an 83-59 victory over Xavier in San Jose, Calif. on Saturday night. Jim Nantz, Grant Hill, Bill Rafferty and Tracy Wolfson will be on the call for CBS. Tipoff is set for 6:09 p.m. (Photo courtesy The State, Columbia, S.C.)

Thank goodness we basketball fans in Letcher County still have an SEC team to get behind in the NCAA Tournament. Even better, Jenkins High School graduate Matt Figger has played a major role in putting together the team in question, the University of South Carolina Gamecocks, and helping them become one of the biggest success stories in college basketball today.

Figger, South Carolina’s recruiting coordinator and assistant head coach, can do much to help erase that awful feeling many of us were left with on Sunday after North Carolina forward Luke Maye hit his game-winning, Kentuckyseason killing shot with only 0:03 left on the clock. Should Figger and Gamecocks head coach Frank Martin come up with yet another great game plan this Saturday night — this one resulting in an improbable win over No. 1 seed Gonzaga in the opener of the Final Four in Phoenix — it is very likely that South Carolina, 77-70 winners over Florida in the Elite Eight, would face North Carolina in next Monday’s tournament final. 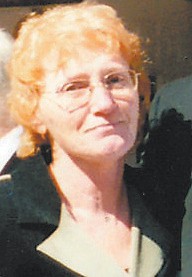 MCHC nurse Patti Figger of Burdine is flying to Phoenix to see her son coach in the NCAA Final Four.

The Gamecocks (26-10) are led by SEC Player of the Year Sindarius Thornwell, a South Carolina native who was recruited by Figger, whom Martin credits for much of the team’s success. Figger is a son of Patti Figger of Burdine, a longtime nurse at Mountain Comprehensive Health Corporation’s Whitesburg Medical Clinic who is known for her hard work and pleasant personality. She and another son, Will Figger, will be aboard the Gamecocks’ team plane when it leaves Columbia for Phoenix this week, reports daughter Sonja Collier of Millstone.

South Carolina’s magical March run has been so improbable that its most famous fan, combo rock and country music star Darius Rucker, was in tears after the Gamecocks won the East Regional at New York City’s Madison Square Garden.

“Gosh,” said Rucker, “I can’t believe that just happened. … We’re in the Garden, watching the Gamecocks play to go to the Final Four. If you’d have told me that ten years ago I’d have told you that you were on crack.”

NBC Sports reporter Rob Dauster noted in a column earlier this week that “prior to this season, the Gamecocks hadn’t been to the NCAA tournament in 13 years. They had been to four NCAA tournaments in the previous 43 seasons, and they had never won back-to-back tournament games.”

Writes Dauster: “That’s the program that Frank Martin inherited in 2012, when he left Kansas State following a falling out with his athletic director, John Currie. Like South Carolina, Kansas State was hardly considered a destination job when Martin was at the helm, but he was able to build off of a foundation created by Bob Huggins. Martin had been to four NCAA tournaments in five years with Kansas State when he made the decision to leave. Nothing is more important to Martin than loyalty.”

You can count Figger as one who is loyal to Martin and vice versa.

“Matt Figger enters his fifth season at South Carolina and his fourth as the associate head coach, after most recently serving as an assistant coach for the Gamecocks (2012-13), and previously in the same capacity at Kansas State for Frank Martin for five seasons (2007-12),” says a biography of Figger released by the South Carolina Sports Information Department at the beginning of this season. “Figger is also Carolina’s recruiting coordinator and helped the staff sign the No. 23 ranked class in the nation during the spring of 2013 according to ESPN.com.”

Last summer, Figger was rewarded for his years of good work at South Carolina with a one-year deal totaling $262,500. With that contract scheduled to expire at the end of this month, it wouldn’t come as a shock — especially to Martin — if Figger lands a head-coaching job.

“Matt has been with me from day one at Kansas State, and he is as ready as anyone can be to take on head coaching duties,” Martin said in a statement upon Figger’s salary increase and promotion to associate head coach. “I’m excited for what he brings to our program every single day, and he’ll remain responsible for the same things that he has done up to this point. I just want everyone to understand and know — players, and everyone who is around us — that Matt is ready to take on the challenge of being a head coach.”

A 1995 graduate of Eastern Kentucky University, Figger — known as “Figgs” to his friends — was an assistant for 10 years in junior college before accepting jobs at South Alabama and Arkansas when those two programs were coached by former UK star John Pelphrey, who is now an assistant at the University of Alabama.

Before graduating from EKU, Figger played baseball at Pikeville College in Pikeville (1990-91). He and his wife Katrina have a son, Vincent.

Figger told reporters that South Carolina’s motto has become “Why not us?” since its upset of No. 2 seed Duke early in the tournament.

“When we beat Duke, Frank said ‘Why not us?’” Figger said. “That’s the first time we really talked about” going to the Final Four.