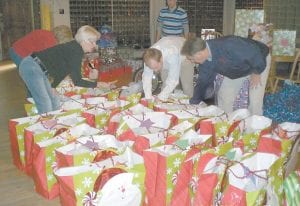 Employees at a Letcher County coal company say they hope to become more involved in community events during 2010 after experiencing the joy of giving to others during the recent holiday season.

Instead of spending money on a holiday party, employees of Cumberland River Coal Company gave blankets to 122 residents at Letcher Manor Nursing Home and bought gifts for 33 children through the “Tree of Hope” program.

Workers at the company’s Blue Ridge #1 Underground Mine and Blue Ridge Surface Mine located near Eolia raised about $1,800 to buy the blankets and gifts, with Cumberland River Coal matching the amount.

Each child received a brandname pair of shoes from Tops and Bottoms of Wise County, Va., which gave the coal company a discount to help with the project.

Employees of Cumberland River’s Band Mill #2 Mine near Eolia raised $905, which was also matched by the coal company. That money was used to buy gifts for children in Norton, Va.

“In harsh times like these we believe that now more than ever we need to find ways to help those less fortunate than others,” said Seth Collins, a warehouse technician for Cumberland River Coal Company. “We are proud of the employees who made this possible and really want to give them all the recognition in this.”

Gaither Frazier, general manager of Cumberland River Coal, said economic hardships caused by a continuing global recession sparked the decision by employees to give to others rather than to have a company Christmas party.

“Some of the guys at work were talking about how it is hard times,” said Frazier. “This is the first year we didn’t have a Christmas party. We didn’t think it would be right to have a party with some of them without jobs.”

With the holiday season now ended, a community outreach steering committee is planning ways for miners and other employees to volunteer their services for community projects.

“We want to start getting more involved in the community,” said Frazier. “We want to not only donate money but donate time.”

The coal company has donated computers and money for school supplies to Arlie Boggs Elementary School at Eolia. Frazier said employees may help with an archery class as part of an afterschool program.

Collins said the committee is discussing participating in this year’s Letcher County Relay for Life Event with all proceeds going toward the American Cancer Society.

Frazier said mining companies have historically been portrayed as coming into the area and taking everything away without giving anything back.

“We want to be able to do some things throughout the year and help the local schools — anything we can do to help educate people about mining,” said Frazier.

Collins, who is a member of the community outreach steering committee, said 60 percent of the coal company’s employees live in Letcher County.

“We live here,” said Frazier. “We work here. We want to be a part of these communities.”