'Every able-bodied, drug-free coal miner is working today if he wants 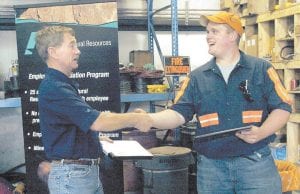 
Alpha Natural Resources has introduced an unprecedented, multiyear package of rewards and incentives to its employees in Letcher County and elsewhere.

The package was presented at Alpha’s 58 mining sites in four states, including the Enterprise and Paramont operations which employ Letcher County miners. Employees were given ownership in the company in the form of a grant of 25 shares of company stock. Employees were also informed they no longer have to contribute to health, dental and vision insurance premiums.

Additional incentives include semi-annual bonuses for operating personnel based on continued service to the company, and rewards for mine rescuers and trainers, including cash payments for participating on the all-volunteer teams and vacation money to use in their time off with families.

Alpha also unveiled an energy relief/fuel assistance program to help employees cope with higher commuting expenses caused by high gas prices. the first year alone, the package is worth more than $3 per hour to the average employee.

To convey their appreciation, several members of Alpha’s executive team personally handed out share ownership certificates and information on the other rewards at a number of company mines in Kentucky, Virginia, West Virginia and Pennsylvania.

"We see this as a significant day – maybe the most significant – in our company’s history," said Michael Quillen, Alpha’s chairman and CEO, who met with miners at the company’s Cucumber, W.Va. mine on May 1. "Alpha’s shareholders have benefited from their dedication and hard work, and it’s time that we publicly acknowledge their efforts."

Quillen went on to say: "Alpha wants each employee to know that we value their contribution. It’s our way of expressing the great admiration we feel for their continuing loyalty. We also recognize how all employees have been hit hard with in creased fuel costs, and a lot of them have to drive long distances to reach our mines. We appreciate what they do for the company, and we intend to help them out with fuel assistance."

"Today, coal finds itself squarely in the middle of our nation’s discussion of energy independence," Crutchfield said. "It’s time we readied ourselves for an exciting future by first publicly expressing our appreciation for our miners and their families and, secondly, by introducing incentives to attract and retain the next generation of miners."

For the mining industry as a whole, a maturing workforce is leading to a shortage in the supply of qualified miners.

According to the National Mining Association, the main trade organization for coal producers, the average coal miner is 50 years old. With demand for coal growing worldwide, the coal industry expects that it will need 50,000 new miners in the next 10 years.

Alpha will pay bonuses of up to $9,000 to miners who stay three years, and will pay even more to members of highly trained rescue squads.

Both companies are trying to fend off the employee poaching that rippled through the industry during a price spike in 2005 and 2006. Driven by the weak dollar, high ocean freight rates and shipping bottlenecks, prices for higher-energy coal from eastern states have jumped even higher this year, more than doubling to about $95 a ton for utility-grade coal, and $200 or more a ton for coking coal used by steel manufacturers.

"Every able-bodied, drug-free coal miner is working today if he wants," Quillen told The Associated Press. "You basically have to try to steal them from somebody else."

Alpha, Massey and others are looking for more miners because they’re boosting production to take advantage of the price spike. Massey, for instance, has set an ambitious goal of increasing output 25 percent from its Virginia, West Virginia and Kentucky mines by 2010. Massey plans to open new mines at the rate of one every 17 days this year, and hire 300 to 400 new miners.

Current government estimates put the number of U.S. miners at about 83,000, including about 47,500 at underground mines.

Labor is a bigger problem for underground mines, which still dominate Appalachia. Surface miners are easier to find because skills such as driving big trucks and operating heavy machinery easily translate from other industries, such as construction, Quillen said.

"We look at it as kind of a reward, retain and recruit program," Quillen said.

While he considers the stock being given to miners as more of a thank you, Quillen said incentives such as $30 a month for gas are solely meant to retain staff.

Quillen said many coal miners drive SUVs and pickups and often drive 60 to 80 miles each way to work, which is a one of two major reasons for turnover.

The other is a better shift elsewhere.

"Energy is just such a huge issue for America going forward," he said.

Alpha Natural Resources is a leading supplier of high-quality Appalachian coal to electric utilities, steel producers and heavy industry. Approximately 89 percent of the company’s reserve base is high Btu coal and 82 percent is low sulfur, qualities that are in high demand among electric utilities which use steam coal.

Alpha is also the nation’s largest supplier and exporter of metallurgical coal, a key ingredient in steel manufacturing. Alpha and its subsidiaries currently operate mining complexes in four states, consisting of 58 mines supplying 11 coal preparation and blending plants. The company and its subsidiaries employ more than 3,600 people.

The company purchased the Enterprise Mining operations in Letcher County, including a preparation plant at Roxana, in 2005.

Compiled from staff and wire reports.