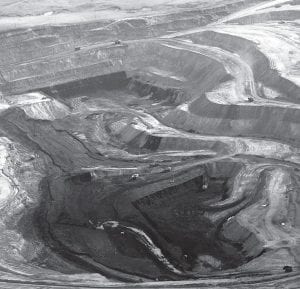 A large strip mine is seen from the air in northeast Wyoming near Gillette, Wyo. Facing a bruising fight over climate change, the coal industry is on the political offensive this election year to ensure that no matter who wins in November, so does coal. (AP Photo)

Facing a bruising fight over climate change, the coal industry is on the political offensive this election year to ensure that no matter who wins in November, so does coal.

Billions of dollars in corporate profits are at stake for the companies that mine, ship and burn the nation’s most abundant domestic fuel.

Some powerful Washington voices, including Senate Majority Leader Harry Reid and House Oversight Committee Chairman Henry Waxman, have lined up against coal-fired power, which churns out two billions tons of greenhouse gases annually. Not shirking from a fight, coal’s supporters are spending tens of millions of dollars to cement their support among members of Congress and the top presidential candidates.

The industry is also appealing directly to the voters those politicians need.

TV ads in key primary states, most recently Ohio, promote the fuel as a clean alternative to foreign oil. A network of 130,000 coal supporters has pledged to spread the word – among friends, candidates, anyone they encounter – that coal produces half the nation’s electricity. 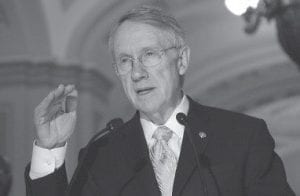 Senate Majority Leader Harry Reid of Nevada gestured recently while meeting with reporters on Capitol Hill in Washington. Reid is among a number of powerful voices in Washington who are lining up against coal. (AP Photo/Dennis Cook)

“We are out there talking to everybody, from people who are running for president of the United States down to Joe Sixpack,” said Joe Lucas of the industry group Americans for Balanced Energy Choices. It has paid $5 million to CNN to cosponsor at least six presidential debates and air other network advertisements.

“This is not only about protecting against (anti-coal) policies being decided, it’s about putting in place strategies to make sure new coal plants are built,” Lucas said.

The group expects to spend some $40 million this year. That’s more than double its spending in 2007.

With 59 coal power plants scrapped last year, the industry is fighting to make sure it can emerge from the climate change debate with a guaranteed spot in the nation’s energy future. Even as critics call for shuttering coal plants, the industry is shopping new uses for the fuel, such as converting it into synthetic diesel and jet fuel through a proposed group of coal-to-liquids plants.

In recent years, the industry has enjoyed a strong ally in President Bush. He steered hundreds of millions of dollars to develop technologies that could reduce coal emissions.

But momentum against coalfired power has been building. Reid, who criticized Lucas’ group for spreading “misleading” information during the buildup to the Nevada caucuses, said recently that coal was “ruining the world.”

Waxman recently called for a ban on new coal-fired power plants unless they reduce carbon dioxide emissions. In January, the Energy Department pulled the plug on the industry-supported FutureGen project, a $1.8 billion bid to build a plant that would emit little carbon dioxide. The department cited soaring cost projections.

The top presidential candidates are reluctant to draw a hard line against coal. Instead, they advocate government investments in new technologies to capture carbon from coal plants and store it underground.

Sen. Barack Obama, for example, wants existing plants retrofitted with carbon-capture technology “as soon as it is commercially available.” Meanwhile, Sen. Hillary Rodham Clinton, who acknowledges the intense economic pressures to use the fuel, supports projects that are at least partially cleaner than current technologies allow.

Sen. John McCain has also talked about federally subsidized research to find a way to limit greenhouse gases. But McCain gets low marks from the industry for his past sponsorship of a cap-and-trade system that would limit carbon emissions.

Regardless of where they stand on the issue, the fact that coal is even a topic for debate underscores the fundamental role the fuel plays in the United States.

Some opponents who have fought coal plants over health issues are now backing climate change legislation that would preserve coal’s role as a major player in the energy industry.

“We have no love affair for coal,” said Jonathan Banks of the Boston-based Clean Air Task Force. But, he added, “we’re not going to get a climate policy by destroying the coal industry.”

The coal industry has given a combined $38 million to federal candidates since stepping up their climate change campaign three years ago. More than 65 percent went to Republicans, according to an analysis of campaign data compiled by the Center for Responsive Politics.

But utility companies that burn coal are now putting almost half their money behind Democrats. Obama topped the list of all recipients this cycle with $248,000. Clinton was second with $200,000, and McCain was ninth with $93,000.

The Center for Responsive Politics’ Massie Ritsch said the coal industry’s historical “true color” is red, but with Democrats controlling Congress and making a strong run at the White House, “they’re having to renew some friendships with Democrats.”

Large amounts of cash also flowed to representatives of coal producing-states such as Montana, West Virginia and Virginia, which stand to be rewarded handsomely if technology can be developed to capture carbon dioxide from burning coal.

Despite the string of scrapped or delayed power plant proposals, the wheels are in motion on the industry’s largest domestic expansion in at least two decades. Twenty-two new coal plants are now under construction and dozens more are in the pipeline.

But Wall Street has not been deaf to the criticism. Several major investment banks recently announced financing for new plants would be contingent on addressing greenhouse gas emissions, prompting environmental analyst Lester Brown to call the move a potential “kiss of death” for the industry.

For Reid and other critics, “clean coal” remains an oxymoron. Far better, they argue, would be to concentrate on renewable energies such as wind, geothermal and solar power – reducing coal’s share of the electricity market.

“This isn’t just Sen. Reid, this is governors and elected officials in states across the country taking a stand against dirty coal,” said Reid spokesman Jon Summers. “There’s no such thing as clean coal.”

Nearly half of the country’s coal comes from the Powder River Basin in Montana and Wyoming. Brian Schweitzer, Montana’s Democratic governor, is among those walking a fine line between pleasing those worried about global warming and developing a cheap and plentiful source of power.

“There is no choice but to go forward with coal,” Schweitzer said. “The question is, how are we going to move forward and develop the technology that will make coal clean?”