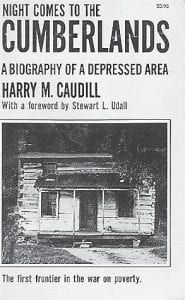 “Night Comes to the Cumberlands,” Whitesburg attorney Harry M. Caudill’s book about the problems confronting Central Appalachia, was attracting highly favorable reviews in major national newspapers and magazines when it was published 50 years ago, in summer 1963. In the August 28, 1963 edition of The Mountain Eagle, South East Coal Company president Harry LaViers Jr. writes that he finds much to like about the book, but doesn’t agree with all Caudill has to say. LaViers also talks about problems facing the coal industry, some of which remain the same 50 years later. His letter to the editor follows: To the Editor:

Here are my thoughts on Harry Caudill’s new book (“Night Comes to the Cumberlands”).

I found the book interesting and readable. It shows the result of considerable effort, thought and research. Beginning on Page 371 and carrying on to the end of the book can be found a clear and concise statement of the road for those of us who intend to stay here in the mountains and tackle these problems. I feel greater emphasis should be placed on an effort to train and re-settle in other regions much of eastern Kentucky’s younger population.

Other than that I agree with his program.

Harry Caudill is by training a lawyer and by inclination a student of human nature. I am by training an engineer and more inclined to scientific analysis. His cynical outlook on the world I reject. I do not believe that everyone in eastern Kentucky past and present are as vile and self-seeking as he does. I believe far more of the world’s (and eastern Kentucky’s) troubles nave come through well-intentioned mistakes than through selfish and evil men.

It was an economic mistake to open eastern Kentucky’s coalfields before the First World War. The coal was too thin and too distant from the then existing markets. Several years ago John L. Lewis, George Love (president of the largest coal company, Consolidation Coal), and J. D. A. Morrow (president of the largest coal equipment company, Joy) testified before the U. S. Congress that the coal of eastern Kentucky should have been left undeveloped, as there was as yet no economic need for it. In passing I might add that Mr. Love later disposed of his company’s holdings in eastern Kentucky.

Much of eastern Kentucky’s present problems originated in a research laboratory. In the early 1940’s a method of producing large diameter seamless steel pipe was found. For years vast amounts of natural gas had lain idle because there was no way to get it to market. This technical breakthrough supplied the way — and removed a 100-millon ton coal market. Eastern Kentucky was particularly hurt because its high production costs had led it to depend heavily on this market where the price was similarly high. Less than five years later out of the labs came a process to cast high strength steel. This meant that heavy diesel engines could now be made small and light enough to fit a railroad locomotive.

This displaced another 100-million ton coal market. It is often said that John L. Lewis is the “greatest salesman the oil and gas companies ever had.” His effects were nothing as compared to the two developments listed above.

The third development was the development of Tungsten Carbide. The carbide bit fathered the continuous miner. The Lee Norse Continuous Miner compared to hand loading at South East Coal Company cut employment from 600 to 200 while production rose from 1800 to 3500 tons per day.

The constant growth of the United States electric power industry has largely made up the loss in coal markets, but technology continues to replace men with machines. This is the central problem in eastern Kentucky and soon will be the central problem of the United States. For a few years an improvement in education and training will help this problem. Eventually automation will be so complex that a large portion of the population will not have the I.Q. to master the work regardless of how much education and training they receive. This will require a new social adjustment, some of the problems of which we can see now in what Mr. Caudill describes as “Waste and Welfare.”